While we no longer have Splinter Twin in Modern, we do have Saheeli and her Cat friend. I’ll be honest though—I’m not sure how much guarding a 1/4 is really capable of. That’s neither here nor there though, as I assume he just brings his Cat friends when something really needs guarding. I don’t know. Who knows how Cats work?

Nevertheless, if there’s an infinite combo that works in Standard, there’s no harm in trying it in Modern, especially when you have a way to cast everything a turn earlier. This deck, piloted by SeRoX, also contains such hits as Oath of Nissa and, while not new, the exciting Domri Rade. We’re giving those bulk Modern Masters 2017 mythics a little value today, which is just another service I provide!

Check out the list we’ll be virtually sleeving up:

The best part about decks like this is that when you don’t have your combo assembled, they’re still just efficient beatdown, value decks. Just casting Tarmogoyfs and blinking your Blade Splicers is often good enough to win.

As ever, I’m apparently (spoilers!!!) destined to lose round 1. No matter! The deck still performed admirably. I actually didn’t expect to assemble the combo nearly as many times as I did, but it worked, and it seems that going infinite is still a viable strategy in Modern.

While the combo itself is straightforward, especially since we’re all familiar with its Standard iteration, I’ll cover some of the other components that make the deck tick. I specifically want to give a shout-out to Gavony Township. This land is one of the most unassumingly powerful cards in Modern, and I don’t think it gets nearly enough credit. In a deck like this, where you’re swarming the board with a bunch of little durdles, it will typically take over in a turn or two. 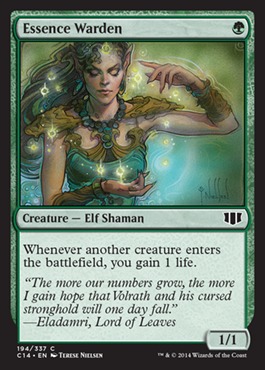 At first I didn’t really understand the Essence Warden. I also didn’t really understand the first Restoration Angel over the fourth Felidar Guardian. Turns out that you can actually have the Cat and the Angel blink one another infinitely to gain a million life if the Essence Warden is in play. The problem, however, is having both the Angel and the Essence Warden in play to do this when they’re both 1-ofs. Is this sub-combo worth diluting the power of your game-winning combo? I’m not sure. Sure, you have Oath of Nissa to find the pieces, kind of, but it’s not like a Chord of Calling. Sun Titan also seems cute, but it’s a very powerful card that can get back a Saheeli Rai if she goes to the graveyard, or anything else for that matter. Then you have Reflector Mage, Eternal Witness, and Domri Rade: All 1-ofs that you can hit off of Oath of Nissa. I’m just not sure that’s good enough. Who knows?

Either way, the deck was sweet, it reminded me of a Chord of Calling deck, and it felt powerful. I was able to beat the other grindy, midrange decks, but did end up losing to the two combo decks. Such is the price of not having hand disruption, I suppose! Try it out. Let me know what you think!