The addition of Rivals of Ixalan has made me a big fan of this Draft format. Not only has the format slowed down, but there are a lot of crazy possibilities, which gives me the room to brew that I always desire. From playing a 60-card deck to disregarding colors and acquiring Treasure, this format has tickled my fancy. I’ve actually been both drafting more and winning more in this format than any in recent history (except at the Pro Tour, sadly, though winning zero games of Modern didn’t give me a lot of opportunities to draft), and the deck I draft most frequently is both good and sweet.

That deck, unsurprisingly, is Treasure Blue, or more accurately, “The Sailor of Means deck.” Let’s break it down.

Game plan: Flood the board with defensive dudes and Auras, then draw a bunch of cards with Secrets of the Golden City. Finish the game with bombs (off-color, if needed).

This deck can be any combination of colors with base blue, but in order I draft the following:

Blue-green is unlikely to pan out because green doesn’t add a lot to the archetype and you’re usually better-served drafting Dinos or something if green is open. I find myself in U/W the most because white is deep on playables and has a lot of cards I think are underrated (though as more people draft/write about the format, that’s becoming less true as well).

You want to put yourself in the position to take and play great cards you open, and you want to defend yourself and blank a lot of your opponent’s creatures with defensive bodies. Your removal is reserved for the creatures you have trouble blocking, and card draw like Secrets of the Golden City (Ancestral Recall) gives you a big edge going late. 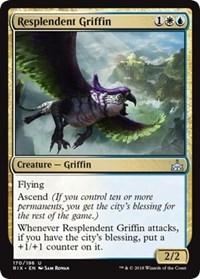 Here’s the common pick order for U/W (with the usual caveat that pick orders change based on the cards you already have):

I like taking advantage of some of the underrated defensive cards (Sun-Crested Pterodon, Sailor of Means, Gleaming Barrier, Snubhorn Sentry, Sea Legs), and have felt like you can stabilize and get #blessed without tons of trouble. Secrets of the Golden City is a very strong draw engine if you can stall the game, and there are a lot of cards that let you trade 1-for-1. 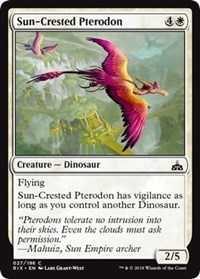 The secret is out about Sun-Crested Pterodon, but even so I think you can pick up a good squad of defenders here. You want to balance defense, Sailors, card draw, and removal, with the assumption that you’re snapping up any bombs you see. If you are definitively 3 colors, or already have a Pterodon, I move Sailor above the flying chicken.

Spire Winder has been pretty bad since it doesn’t block all that well until late. It’s playable, but I’m not a big fan. Likewise, I only play Soul of the Rapids if I have Mark or Squire’s Devotion. Crashing Tide isn’t a priority either, though it’s a fine enough card that I’ll take it over the Sentry/Barrier/Sea Legs defensive options.

What I really like about this deck is how flexible and replaceable all the cards are. Waterknot and Luminous Bonds, tons of good blockers, and Pirate’s Prize is a good Secrets replacement if needed. Once you are splashing, you have a couple outs for Treasure, alongside cards like Evolving Wilds and Traveler’s Amulet. 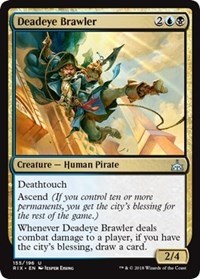 Black is a great color to pair with blue as well, though it happens a little less often than white (because the high pick cards are better and the color isn’t quite as deep). What it does have are the best uncommons, and if you start with Ravenous Chupacabra or Golden Demise, then see a Waterknot, U/B is a great place to be.

This has pretty much the same game plan in mind as U/W, with the biggest difference being that you lose the defensive power of the Pterodon. You do gain Dusk Charger, though it’s worth noting that these decks often blend together, and I’ve splashed both Pterodon and Dusk Charger in U/B/w and U/W/b respectively.

Some notes on the deck as a whole:

Single-color bombs are preferable (like Tendershoot Dryad), but Treasure makes even double-colored cards splashable. Prosperous Pirates does go up once you’re there.

If you have good finishers, just lean toward drafting defense and card draw—winning is trivial once you’ve locked everything up.

Take sideboard cards aggressively. I like Dark Inquiry, Negate, Cancel, Plummet, and Naturalize because this deck isn’t beating opposing bombs before they come out, so you need to answer them.

If you can pick up a few copies of Squire’s Devotion/Curious Obsession/Mark of the Vampire, you can slam all the hexproof creatures you see and just have that package be your finisher.

You don’t have to be 3+ colors, and if your 2 colors are nice and open, you can scale back on the Treasure/fixing and just fill up on good cards.

Choosing to draw can be a legit strategy against opposing midrange/control decks, especially if you have some good early defensive plays.

I really enjoy drafting this deck, and find that it has a lot of subtle differences from Draft to Draft. It harnesses the power of bombs well, while also having an answer for just about everything, and being remarkably consistent to boot. Good luck meming!