Core Set 2020 has led to a resurgence of tribal decks, especially for tribes that needed one or two final cards to make a competitive push into Standard. For example, the printing of Marauding Raptor and Rotting Regisaur allowed Jund Dinosaurs to become a competitive deck. Likewise, Vampires gained Knight of the Ebon Legion and Sorin, Imperious Bloodlord, and now it’s widely regarded as the premier aggro deck in the format. But let’s not forget about Angels.

Boros Angels had been around in Standard as a midrange deck with minor Angel synergies, but it always lacked effective early drops and had trouble outgrinding removal-heavy opponents. Core Set 2020 changed the equation for the Angel tribe. 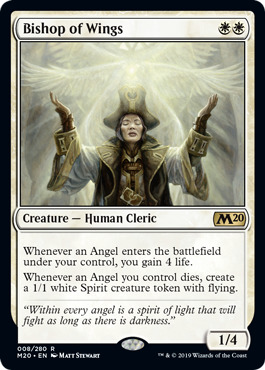 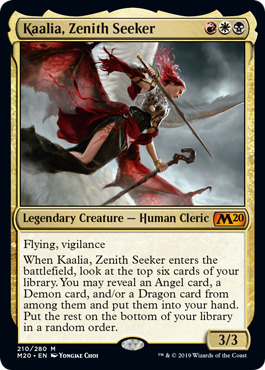 Bishop of Wings is the two-drop that Angel decks always wanted. It keeps you alive against aggro and mitigates the impact of sweepers against control. And if you get two on the battlefield along with Resplendent Angel, then you can easily create several Angel tokens for free.

Kaalia, Zenith Seeker is the real headline. She requires you to add black, but that’s not a big cost. The mana in Standard is good, and Angel players were already interested in black for Seraph of the Scales (which is one of the better Angels in Standard) and Sorin, Vengeful Bloodlord (an effective way to trigger Resplendent Angel).

In the right deck, the value that Kaalia can provide is reminiscent of Rogue Refiner—a card that was banned in Standard. While Kaalia doesn’t provide energy, she has a larger impact on the battlefield because she has flying, vigilance, and an extra point of toughness. All in all, it’s a pretty absurd package for a three-drop. Of course, this comparison is predicated on the assumption that you can usually “draw” a card with Kaalia’s enters-the-battlefield ability.

How many cards can you expect Kaalia to provide?

Naturally, this depends on the exact composition of your creature base. Fortunately, there were two successful Mardu Angels decklists in recent weeks, and they enabled me to run some relevant numbers.

This list contains 12 Angels, 2 Dragons, and 2 Demons. If you take one Kaalia, Zenith Seeker from the deck (along with potentially several additional cards that would represent your opening hand and first couple of draw steps) and put her ability on the stack, the probability distribution is as follows:

The expected number of creatures you will be able to put into your hand is 1.15.

I calculated these numbers by applying the multivariate hypergeometric distribution in a Python script. Basically, for every feasible 6-card combination of Angels, Dragons, Demons, and other cards, I asked my computer to determine the number of different creature types, along with the probability of seeing this combination in the top 6. And then all that remained was iterating over the feasible combinations and adequately summing up the numbers. It’s an enjoyable exercise.

This list contains 11 Angels, 2 Dragons, and 0 Demons. If you take one Kaalia, Zenith Seeker from the deck and put her ability on the stack, the probability distribution is as follows:

The expected number of creatures you will be able to put into your hand is 0.92.

Tweaking the numbers and improving the deck

Mardu Angels is a relatively new archetype, and the two lists I showed had large differences in their card choices. For the Angel fans among you, I have the following suggestions on creature configuration, mana base, interactive spells, and sideboard.

Comparing the two lists, Heroesdownfall had two more Demons and one more Angel, and this increased the expected number of creatures in a Kaalia trigger by 0.23. I think that’s worth it, so I prefer the creature configuration of Heroesdownfall.

To learn more about the driving force behind this increase, I ran the numbers on several alternative creature configurations.

From this, I learned the following:

In any case, unrelated to Kaalia, I would replace 2 Tithe Taker in Heroesdownfall’s creature configuration with 2 Tomik, Distinguished Advokist. I definitely like having a few extra two-drops for curve reasons, but Tithe Taker just runs into any ground blocker. Tomik fits the flying plan better while doubling as an effective answer to Nissa, Who Shakes the World, so I believe it’s better.

Both mana bases are similar, but I would like to increase the number of white sources to 20 to make it easier to cast Bishop of Wings (and possibly Tomik) on turn 2. To accomplish this, I would take Heroesdownfall’s list as the base but replace 1 Swamp and 1 Mountain with 1 Temple of Silence and 1 Temple of Triumph.

The number of red or black sources is perfectly fine—14 is a good number to support Skarrgan Hellkite or Doom Whisperer.

With Bant Scapeshift as the top-tier deck in Standard right now, I think you need to tweak your removal suite by adding Flame Sweep and Legion’s End in the main deck. These are clearly better against a swarm of 2/2 Zombies than spot removal spells, and they still hold a lot of value against opposing Llanowar Elves, Hero of Precinct One, Runaway Steam-Kin, and/or Legion Lieutenant. Besides, the Bedevils that Vinay Gupta had were a bit too ambitious on the mana base anyway.

By the way, in case you were curious: If you cast a turn-2 Legion’s End on a 4-of (such as Runaway Steam-Kin or Hero of Precinct One) then you can expect to snag approximately 0.20 extra copies from your opponent’s hand. Not great, not terrible.

To further improve against Bant Scapeshift, I would suggest adding Alpine Moon to the sideboard. Also, Duress and Fry are excellent multi-purpose cards that can come in against a wide variety of matchups, so I think they deserve their slots as well.

Putting it all together, here is my suggested list.

If you want to give your Resplendent Angels and Lyra Dawnbringers one last go before they rotate out, then Mardu Angels is the deck for you. Flying is still great, especially when you need to pressure planeswalkers or when you need to circumvent a swarm of 2/2 tokens. And if there’s anything that the Angel tribe does well, it’s flying.

From a mathematical perspective, Kaalia is one of my favorite cards in Core Set 2020, so I enjoyed setting up the calculation and learning that in a deck with 12 Angels, 2 Dragons, and 2 Demons, she will yield 1.15 creatures on average. If there is a specific configuration of Demons, Dragons, and Angels that you would like to know Kaalia’s probability distribution for (either in 60-card or 99-card decks) then ping me in the comment section below or on Twitter, and I’ll be happy to answer when I can.