Welcome back to What’s the Play!

Last time, you were in the midst of resolving Though-Knot Seer’s ability.

Click to enlarge.
After some thought, what should you take?

First, you make sure you can’t take Eldrazi Temple, as that’s the actual best card in the opponent’s hand. Given that that’s off the table, you’ve got some good options.

You can rule this one out pretty easily. The opponent can cast Thought-Knot without it, and taking Endbringer is better than taking the Spirit Guide used to cast it. It gets tougher after that.
Often with discard, especially discard on a 4/4 body, you want to take the card that the opponent can play next. It makes them skip their next turn, and lets you increase the pressure you are placing on them. In this case, the opponent can play either Thought-Knot or Dismember, so there’s no way to prevent them from having a good play on the subsequent turn. 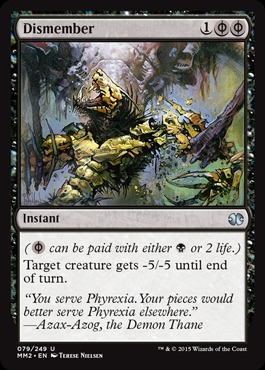 It’s tempting to take the only removal spell. Taking Dismember means the opponent will play a Thought-Knot on their next turn, likely taking Reality Smasher. At that point, you can attack and offer the trade—a trade the opponent is likely to turn down. They will then play Endbringer, and you will be in a terrible spot. Given that your Thought-Knot isn’t racing effectively and can’t even attack past Endbringer, taking Dismember isn’t very appealing.

Taking Thought-Knot means that the opponent is likely passing the turn with Dismember up. Even if you draw a 2-mana land, playing Reality Smasher exposes it to Dismember, while costing you your City of Traitors. Your next play is probably just attack with Seer, have it get Dismembered, and play Eldrazi Mimic. The opponent then plays Endbringer, and you hopefully topdeck a land to play Smasher, and hit for 10. The opponent then locks down the board with Endbringer. Bad times, and a reason to not take Thought-Knot.

The way all of these lines play out, you lose to Endbringer. The opponent has too much defense in Dismember and Thought-Knot, so you are unlikely to end the game before you meet the End. As such, you should take Endbringer and hope to topdeck better than the opponent. You are behind, but taking Endbringer gives you the most time to attempt to draw out of the situation.

Have a sweet scenario of your own? If you think you can stump the readers (and me) then send it to LSV@ChannelFireball.com*, or via Twitter—just send a screenshot @LSV and I’ll be happy to take a look!

*Please keep your answers in the comments below, and not in my email inbox—I love reading through these responses, but I wouldn’t want to lose any good submissions amid the answers. Thanks!