Legacy can be a tough format to get into. A pool of over 20,000 cards, a deeply-entrenched metagame, and the price tags of some staples means that the format isn’t Magic’s most accessible. Nonetheless, Legacy is a rich and rewarding format to play, and Level One Legacy is all about helping you make a start and find your feet in the format. This week, I’m looking at Reanimator.

Reanimator does, well, exactly what it says on the tin. It seeks to put a massive, game-winning creature into the graveyard, then use a reanimation effect—classically, actual literal Reanimate—to cheat it into play as early as turn 1. Fast mana and a light disruption package help to force the combo finish through opposing interaction.

Griselbrand is usually the weapon of choice for Reanimator decks, although other hard-hitting heavyweights such as Tidespout Tyrant, Ashen Rider, Elesh Norn, and Archetype of Endurance all see regular play. Entomb, as a powerful tutor effect, allows all of these “silver bullet” 1-ofs to have the high impact they’re supposed to.

Reanimator has been around for a long, long time in Legacy, and its fortunes wax and wane as the formats shifts. Typically, its impact is limited by the amount of graveyard hate seeing play.

Nonetheless, and in spite of being close to a pure combo deck, Reanimator can still fight through a fair bit of disruption and executes an extremely potent game plan with surprising consistency.

We talk about combo decks having a “two-card combo” that ends the game, but that’s slightly misleading, as obviously the two-card combo of Show and Tell plus Emrakul actually requires a bunch of extra cards to make mana and the like. With Reanimator, its four-card combo is just that: four cards total. Land, Entomb, threat, Reanimate will usually win the game across two turns.

It gets better, however, as both Dark Ritual and Lotus Petal allow you to slam a Griseldaddy into play as early as turn 1 while still firing off a Cabal Therapy to check if the coast is clear. Discard spells are extremely good against opposing interaction, hence the inclusion of the “free” Unmask, sometimes described as the black Force of Will.

The suite of creatures this deck plays are all designed to play a role in certain matchups. 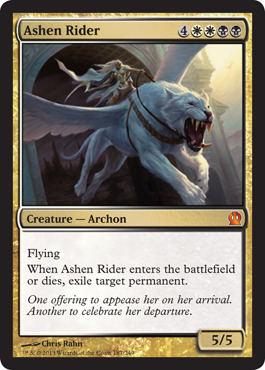 Griselbrand is the default best pick in a vacuum, but Ashen Rider does work against Sneak and Show, Elesh Norn beats small creature decks, Iona punishes mono-colored strategies, while Tidespout Tyrant clears problematic permanents like Ensnaring Bridge. Chancellor of the Annex is another important inclusion, as it allows the deck to go off through an opposing Force on turn 1.

Reanimate is obviously the cheapest and most efficient way to cheat something into play, but Animate Dead has become a very important inclusion in a format awash with Flusterstorm. Being able to go off through opposing Flusterstorms thanks to Animate Dead—an enchantment—is another way Reanimator preys on the current Legacy field.

Unfortunately for Reanimator enthusiasts, the deck runs into many of the typical problems faced by all-in, linear combo strategies. Reanimator doesn’t mulligan very well since it needs a critical mass of cards in order to get across the line, and—rather obviously—folds to effective graveyard hate. Leyline of the Void, Rest in Peace, and friends are all big problems for a deck that doesn’t really have a reliable plan B.

Additionally, Reanimator can be very vulnerable to other types of opposing disruption. Particularly, unconditional removal such as Swords to Plowshares is extremely punishing, and obviously countermagic or discard can be judiciously deployed to hamstring any reanimation strategy.

Today’s Reanimator decks have cut blue entirely in order to speed up the deck with fast mana and the like, but in doing so have cut down on consistency. Without cantrips, this deck relies on just a playset of Faithless Looting in order to see a lot of cards, and when an explosive start isn’t forthcoming, this deck can draw a lot of bad cards and give opponents time to find their footing.

The sideboard mitigates some of these problems—cards such as Lake of the Dead or Stronghold Gambit are ways to play around graveyard hate but on the whole, Reanimator is not a particularly resilient deck in the face of effective interaction, and on top of that sometimes just loses to itself.

How to Beat Reanimator

After reading the last paragraph, you won’t be shocked to learn that the best way to beat Reanimator is with graveyard hate. The difficult thing, of course, is finding room in your fifteen for cards like Surgical Extraction and Rest in Peace, as there are so many other matchups that require just as much attention post-board.

Therefore, it’s important to remember that there are other very effective ways to fight the deck—specifically, countermagic and discard spells. Knowing what to counter is critical. Typically, it’s a choice between their fast mana or their reanimation spells. You have to get a read on the way your opponent is playing to determine which approach will bottleneck them.

Attacking their choke points like this buys a lot of time. Reanimator requires a critical mass of cards and doesn’t play great catch-up Magic most of the time. Leverage discard and countermagic to strand them with a bunch of useless million-drops lying around, and apply a clock to deny them a chance to recover.

Finally, a few specific cards that are very good in the matchup: Ensnaring Bridge demands an immediate answer from Reanimator, whether it’s Tidespout Tyrant or post-board Assassin’s Trophy, and will do a lot of work against their giant monsters. Another great option is Maze of Ith, as Reanimator doesn’t play Wasteland and more broadly doesn’t have too many ways to interact with lands.