The people have spoken! Today I’ll be diving in to one of the Top 8 decks from the Bazaar of Moxen. It also happens to be a deck piloted by a Pro Tour Champion, Poker crusher, and friend of mine, Pierre Canali. 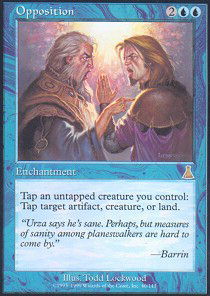 The centerpiece of this deck is a card you almost never see in competitive play. Opposition used to be a multi-format all-star. The combo with cards like Squirrel’s Nest, Deranged Hermit, or other token producers is obvious, but Canali uses Opposition as a lock piece in what looks closer to an Elf deck than anything else.

Imagine a deck like Sneak Attack trying to function under an Opposition. Not only can your creatures keep their mana sources locked down, but their big creature is never getting across. Even getting a Griselbrand into play and drawing a ton of cards doesn’t necessarily help. You’re able to tap down all the white sources of a Miracles deck during their upkeep to keep Terminus off your back or just keep Tarmogoyfs from coming across in a midrange matchup. The fact that Opposition costs 4 may actually be a benefit as you get to dodge Abrupt Decay.

Opposition is essentially a green card. There aren’t many decks that have played the powerful enchantment without pairing it with green. Being able to play mana accelerators that turn into Vindicates later in the game is already an excellent shell. Mana creatures tend to go dead late in the game and are usually poor topdecks. When they have powerful abilities to go with their mana production, in addition to being Opposition enablers, mana creatures start looking awesome.

The best 2 are Noble Hierarch and Deathrite Shaman. Both help to give you additional reach and can provide the blue mana you need for Opposition. 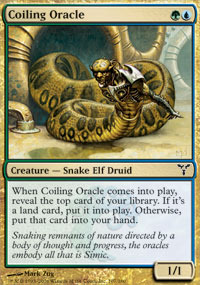 The card advantage duo of 2-drops is what really stands out to me about this deck. Elvish Visionary and Coiling Oracle are card advantage engines wrapped around small creatures. Just look at what these creatures have to offer if you have an Opposition in play!

The deck offers a number of combos with these Elves, as well. 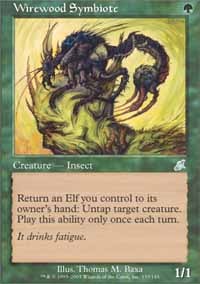 Wirewood Symbiote is a key cog. It isn’t nearly as powerful here since you aren’t actually planning to combo, but returning Visionary or Oracle to your hand to continue to generate an advantage every turn can help to win attrition battles. Keep in mind that you can use the Symbiote during each turn, so you can bounce and replay an Elf during your turn, bounce it again during your opponent’s turn, and then cast, bounce, and cast again on your own! 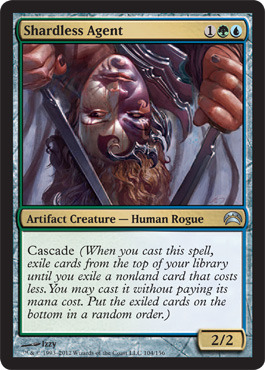 Shardless Agent is just a step above the value of an Oracle or Visionary. It costs an additional mana, but hitting an additional creature or powerful spell to go along with your 2/2 is going to put in some serious work with Opposition. It certainly doesn’t do quite the same crazy tricks as it may in Shardless BUG with Brainstorm and Ancestral Vision, but value is value.

Craterhoof Behemoth is also here, just like the Elves strategies throughout Legacy. You don’t want to draw multiples, or often even a single one when you can tutor for it, but it’s important to have that potential win condition.

Green Sun’s Zenith is the glue that holds these types of decks together. When you see Green Sun’s Zenith, you can be sure to find some Dryad Arbors as well for the turn-1 ramp spell. You also have the Noble Hierarchs and Deathrite Shamans to search for at 1, the Heritage Druid silver bullet, all of those 2-mana card advantage creatures at 2, and then a Craterhoof Behemoth when you have lots of guys in play and are ready to win the game.

Gitaxian Probe is a free spell that gives you information while also making it as if you’re playing a 56-card deck, and the combination with Cabal Therapy is huge. Probe plus Therapy is a turn-1 play that can win the game on the spot, while blind Cabal Therapy is a powerful tool on its own. You’re also playing a deck with tons of card advantage creatures, so sacrificing one to flashback Therapy and wreck their hand is awesome here.

Abrupt Decay is all-purpose removal. It kills many problematic creatures and it’s the best answer to Counterbalance you have. It’s only truly great against the UU enchantment, but it has uses in most matchups. 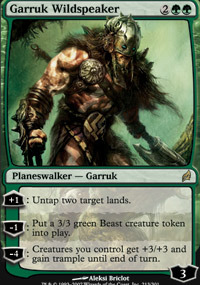 Garruk Wildspeaker is a head-turner. Garruk didn’t see tons of play in Standard and has barely been touched in Modern, so to see it in Legacy is a bit unexpected. It combines with Gaea’s Cradle to produce a ton of mana, and continually creates creatures to use under Opposition. If your opponent is also reasonably locked, you can tick Garruk up and prepare to win the game as quickly as possible.

Reclamation Sage and Scavenging Ooze are both cards that you can consider putting into the main deck. With Green Sun’s Zenith, you’re playing far more copies of these bullets than you otherwise would be. Being able to nuke artifact, enchantment, and graveyard strategies alike is extremely powerful for two sideboard slots.

The other silver bullets are a bit surprising. Spellskite doesn’t have nearly the same applications in Legacy as it would in Modern, but it’s still a great tool against Infect. Not being able to search it out is a huge downside, but you do have some solid ways to draw cards in Oracle, Elvish Visionary, and Probe, while also being able to hit it off of a Shardless Agent.

Nihil Spellbomb, Pithing Needle, and Surgical Extraction are all great bullets, but this deck isn’t even playing Brainstorm, let alone cards like Ponder and Preordain to help you find them. It’s hard for me to justify this being the best way to build a sideboard, but sometimes you draw the right bullet when you need it and they’re all very versatile in the number of matchups you can bring them in. Pithing Needle can stop Sensei’s Divining Top andSneak Attack. Surgical Extraction can hit a reanimation target, but also a key card from Storm. Nihil Spellbomb can completely nuke Dredge, but also Reanimator, Snapcaster Mage, or potential Tarmogoyfs. It also cycles, so it’s never really dead.

Dismember kills most midrange creatures, often including Tarmogoyf and Knight of the Reliquary, while providing early interaction against Delver, Glistener Elf, or Heritage Druid. The fact that it’s also effective against Thought-Knot Seer and Reality Smasher makes it a great option for Sultai decks.

Thorn of Amethyst is a great tool against cheap combo decks. With none of the cheap blue cantrips that I’ve discussed being played here, this deck can operate under a Thorn much better than many others. Many combo decks, such as Storm, can’t operate under a Thorn, and it can even be all the time you need against low-land-count decks like Reanimator to set up a proper defense.

Winter Orb sets up a lock against a variety of midrange strategies. Being able to tap all of their lands with Opposition and not letting them untap means you don’t need nearly as many creatures in play to lock them out. You can even focus your creatures on tapping theirs while still fighting against the removal spells that midrange decks tend to be filled with. If you can’t keep many creatures on the board, Winter Orb will really help to get to the late game. There are also a number of big mana decks in Legacy that can be completely shut down by an Orb.

The comments on this deck generally revolved around it “looking like a pile,” which only makes it that much more awesome to see it have tons of success in one of the world’s biggest Legacy events. There are so many different directions you can take this deck and I feel tons of slots, both in the main and sideboard, are up for debate. What is your favorite part about this deck? What are the first cuts and additions you would make to the main and side? And where do you see the future of Sultai Opposition in Legacy? Sound off in the comments!