Welcome to another edition of Keep or Mulligan! The idea is pretty simple: I present some hands, their context, and you choose Keep or Mulligan. After that, I’ll give you my answer and my reasoning.

You’re playing an average draft Sultai deck. It has good mana (say 8-8-8), but it’s evenly split between the three colors. You’re on the draw and your opening hand is: 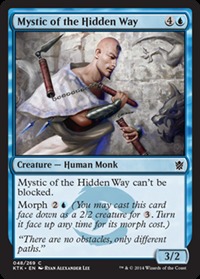 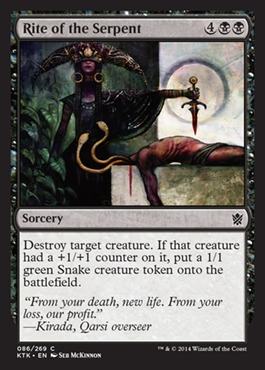 I think this hand has two major problems: The first is that, even though it already has plenty of lands, it doesn’t have access to green mana. Even though the mana in our deck is good, roughly a third of our deck is green and if we draw any of those spells, we can’t cast them. That puts us in the unenviable position of being mana flooded and mana screwed at the same time. We don’t want to draw more lands, since we already have plenty, but we need to draw more because we need colors. The only benefit of being flooded is being able to cast your spells, and this hand can’t even do that. Being mana flooded and missing a color is one of the most frustrating experiences in Magic, because unless you draw exactly one land and that happens to be the color you’re missing, you’re in trouble.

The second problem is that this hand is on the draw and it’s very slow. You have a turn-three play, but it’s not even a very good one—it’s just a morph that you’re going to hope to trade. Then your next spell costs six mana and doesn’t bring you back from a losing position—it’s a 1-for-1 removal spell. If you add that to the fact that you can’t cast a big portion of the cards you draw, the chance for stumbling and losing before you can do anything seems very high. For me to keep this hand, I would have to be on the play and have a green mana source among my five lands.

You’re playing RW Aggro against Green Devotion. You’re on the play, and your hand is: 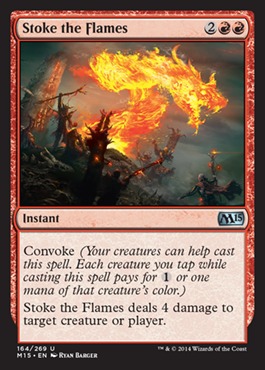 This is one of those hands that I think you should keep knowing that a percentage of the time you’re just going to flat out lose and you can’t do anything about it. If you hit Plains, then this hand is great, but if you hit another red source, then I think this hand is pretty good too—it has turn-3 Rabblemaster, turn-4 Rabblemaster + Stoke their Courser, turn 5 lethal. That is insane and all you need is any land in two draws for that to happen. If you stumble for a turn, you could still win because Rabblemaster is so strong against Green Devotion when backed up by a removal spell, and you have that.

You’re playing Legacy Miracles, and you’re on the draw against Esper Stoneblade and it’s game three. Your opening hand is: 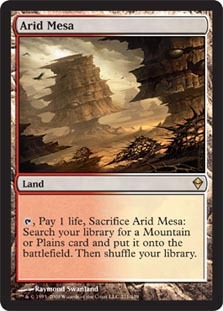 There are not many five-lands-no-Brainstorm hands I would keep in Legacy, but this is one of them. That’s a combination of two factors:

1) Sensei’s Divining Top is by far the most important card in Miracles. It makes every other card in your deck substantially better (in this case it also makes your fetchlands better too) and it bails you out of any bad draws. There is no card I wouldn’t trade for a Top in my opening hand, and I think sometimes I’d trade two cards for a Top.

2) Miracles has more use for lands than the usual blue Legacy deck. A deck like UR Delver can operate on two lands for ten turns and it’ll be happy about it. Miracles, not so much. You have cards like Jace and Top in your deck, and those cards both want lands and help you get rid of excess lands. The fact that you’re playing against another Blue deck also makes those lands a bit better, since they help you play around potential Dazes and Spell Pierces.

There are arguments for not keeping—for example, they could simply play a turn-1 Thoughtseize, turn-2 Stoneforge Mystic and then you probably lose. But most 6-card hands are bad against Thoughtseize anyway, and you always have a draw step. You can draw Swords to Plowshares, another Top, Brainstorm, Terminus, and so on. In the end, however, I think the combination of having your most valuable card plus this deck being good at winning when it has excess lands makes this a keep.

You’re playing Sultai Control in Standard against Mono-Red Aggro. It’s game one and you’re on the play. This is your hand: 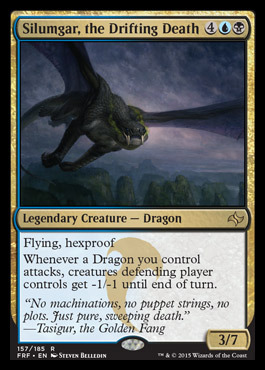 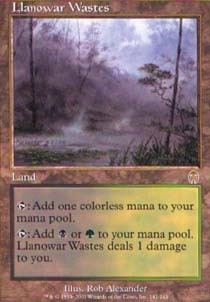 When I originally looked at this hand, I thought it was a mulligan because “damage is bad against Red”. The fact that your deck is blue (and you have a double-blue card in hand already) is also not doing this hand any favors. Upon further consideration, however, I’ve concluded that I would keep it. If the Mono Red player is trying to swarm you, then two Bile Blights is exactly what you need. If you don’t have Bile Blight, it’s very hard to beat a hand of 1-drop, two 2-drops, or even 1-drop, 2-drop, 3-drop. Bile Blight is the best card to have in your opening hand, and this hand has two. Taking 2 damage is not optimal, but if you mulligan into a hand with good mana but no Bile Blight, you’ll take a lot more from that 1-drop, so that’s not an exchange I’m willing to make.

In the end, my thought process was this: I cannot afford to take 10 damage from their one-drop. I certainly cannot afford to let something like a Rabblemaster live. This hand stops that. I will take 2 damage for each spell I want to cast until I draw lands, but 2 is a number I can afford. Red decks nowadays run 12-16 burn spells, some of them being Searing Blood. It’s enough to burn me from 8 but not enough to burn me from 15 most of the time. This hand guarantees I will not be at 8 before I can breathe.

Of course, there is the minor downside of absolutely having to draw more lands—taking 2 damage per spell is sustainable for a couple of turns, but not forever. You also don’t have any blue mana, so you need to draw that as well. If it’s turn four and you still have those two Llanowar Wastes, you will lose the game. But every hand needs something, and, as far as things to need go, land is one of the easiest to get in this deck. In my opening hand, I want lands and I want Bile Blight. There are 25 lands in the deck (more if you don’t run Wayfinder), and only 3 Bile Blights. I would much rather already have the Bile Blights and have to find the lands, than the other way around.

If you have a hand that you think is interesting and would like to see featured in the coming weeks, just leave it in the comments and I’ll take a look. Some conditions:

See you next week,
PV