It’s been a while since Ixalan was released, and I still haven’t had the time to review it for my Vintage Cube additions.

Ixalan isn’t the most exciting set when compared to some other recent releases, but there are still plenty of exciting updates for Vintage Cube.

This is the newest toy in Standard and Modern, so it has to be considered for Vintage Cube as well.

It’s a powerful card-draw engine once flipped into Azcanta, the Sunken Ruin, and is a cool way to enable all kinds of strategies from Reanimator to Storm to getting value with delve cards and regrowth effects.

Pithing Needle and Phyrexian Revoker are two nice cards I’m always happy to pick up, and Spyglass might just be better than Pithing Needle.

Costing 1 more mana isn’t as relevant as it is for Legacy or Vintage, and the fact that you get to look at your opponent’s hand before naming the card makes it easily maindeckable.

Brain Maggot and Mesmeric Fiend are two efficient creatures that always make the cut in any strategy, since disrupting your opponent will be great in both control and combo decks.

Kitesail Freebooter does the same,while adding a bit of evasion. Not being able to take creatures will hurt, but Vintage Cube is mostly about spells, and you are usually going to take a removal spell with it regardless.

I actually discovered the strength of Hostage Taker in Standard a few days after its release when I took it for a spin in a Cube Draft.

A clear 3-for-1, mostly when your opponent has something like a Mox or a Signet, and the versatility of being able to steal a large creature later in the game is huge. This is a great card that will go in any midrange/control deck. 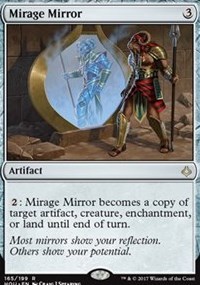 Mirage Mirror opens the door to a whole bunch of combos. It’ll give birth to Marit Lage in conjunction with Dark Depths and it’ll grant you infinite turns with Time Vault. I’m sure there are some other combos as well that I’m excited to discover. If you know of any, please write them in the comments!

Even if you miss drafting a combo piece, Mirage Mirror is a good Limited card and is always the best creature on the table.

I love combos when playing Vintage Cube and this is another piece of any puzzle.

White needs beaters and this qualifies. A 3/1 indestructible is definitely a 2-drop good enough to carry a Sword in Cube Draft, and that’s what white is about.

It doesn’t disrupt your opponent as much as Thalia, Guardian of Thraben, but being indestructible means that your opponent is unlikely to deal with it and it can be a very fast clock. While Adanto’s Vanguard ability comes at the cost of 4 life points, there usually aren’t that many aggressive decks in Cube—your life total isn’t under a huge amount of pressure—and all that matters is that this creature will hardly ever be blocked or killed.

Don’t think of Vintage Cube as a combo only format. Aggressive decks exist and they are quite good if you have the right pieces.

Another aggressive creature that can fit in Vintage Cube. It doesn’t have haste and can be easily handled with a 1-for-1 removal spell, but if it sticks, it’s hard to block and it’s annoying for all the various life gain cards that are very good against Mono-Red.

Rampaging Ferocidon isn’t going to be the next Goblin Rabblemaster, but it will be a fine addition for the aggressive drafters.

This planeswalker is very similar to Garruk, Apex Predator. Costing 1 mana less is definitely a plus, but that mana that you spend for Garruk is definitely worth it.

A Treasure token is much worse than gaining life, which can be crucial on a 7-mana card, and a 3/3 deathtouch Beast is definitely better than a 2/2 menace Pirate. On the other hand, you are able to destroy artifacts and enchantment with Vraska, whereas you can only kill planeswalkers with Garruk.

Both ultimates are online quickly and they are very deadly.

If you are into trying new stuff you can swap Garruk out for Vraska, but I still like the Apex Predator better.

Yes, this card is from Hour of Devastation and not Ixalan, I know.

But just like pros did for Pro Tour Hour of Devastation, everyone slept on this card, and so I’m taking a look at it for my Cube review.

This card is great, and it’s going to be good in so many different strategies, from midrange to control, and I can easily see it fitting in Reanimator as well. 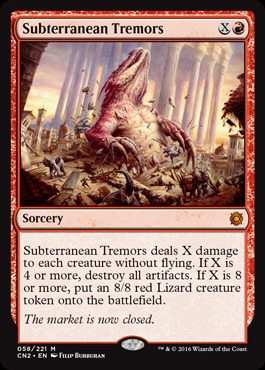 This is an old toy as well, but one that I discovered playing Vintage. Subterranean Tremors provides a lot versatility, just like Sweltering Suns. In decks that are able to make tons of mana—like artifacts or Storm—this is a good piece for disrupting your opponent and having a good win condition on your hands.

I’m still trying it out, but it looks cool for Vintage Cube.

As I mentioned earlier, I like Cubes that are combo-centric and Devoted Druid + Vizier of Remedies is a combo that needs to be in there.

There are already plenty of ways to produce infinite mana (Palinchron + Heartbeat of Spring/Mana Flare), (Black Lotus/Lion’s Eye Diamond + Auriok Salvagers), so this is an easy and cool addition to your green-based decks.

These are the new cards I’m considering adding to my Vintage Cube. The cuts? It’s going to be hard, but after some votes, I’d cut the least played and last picked in their respective colors.

Have a blast with the most fun format of Magic. I’m waiting for its return on Magic Online in just a month!