So far, Ikoria: Lair of Behemoths has introduced us to a world dominated by giant monsters, an unexpected Statement on Spacegodzilla, and a card that appears to be designed more for digital Magic than for paper Magic. 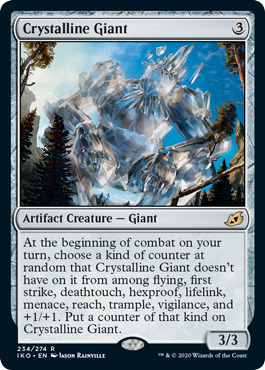 On MTG Arena or Magic Online, the program will surely take care of the randomness and will hopefully give a clear overview of the current set of ability counters. For tabletop Magic, the punch-out counters may help to keep track of the abilities, but how do you properly choose from up to 10 kinds of counters at random?

How is “at random” generally determined in competitive events?

The majority of Magic cards with the words “at random” force players to discard or reveal one or more cards at random from their hand. For example, consider Burning Inquiry and Goblin Lore. These cards fueled the Hollow One decks that did very well in Modern two years ago. Let’s see how this was handled at the Pro Tour level. (The following two clips feature excited Riley Knight commentary.)

In this clip, you see Ken Yukuhiro shuffle his hand and place each card face-down on the table. From these cards, his opponent then simply picked three. As long as the hand is properly shuffled and both players are happy with it, this is a perfectly fine method. Shuffling the hand is important because otherwise it would be clear which four cards were freshly drawn cards from Goblin Lore, and then the selection wouldn’t be random.

In the second clip, Ken Yukuhiro again shuffled his hand and laid it out on the table, but a die was rolled to determine which cards got selected. In total, there were 8 cards and it seemed like a D12 (i.e., a 12-sided die) was around, so they assigned each card a number: 1 for the first card, 2 for the second, and so on, up to 8 for the eight card. Whichever number came up was the card discarded, and a 9 or higher would prompt a reroll. Then this process was repeated for 7 and 6 cards.

In my competitive experience, rolling a die is more common for these types of situations. Properly shuffling a small set of cards is physically difficult, and for an opportunistic shuffler it might be possible to place certain cards in favored spots. Likewise, an attentive opponent might be able to track the location of certain cards as they are shuffled. By rolling a die, potential for abuse is lowered.

What is the best way to determine “at random” for Crystalline Giant? 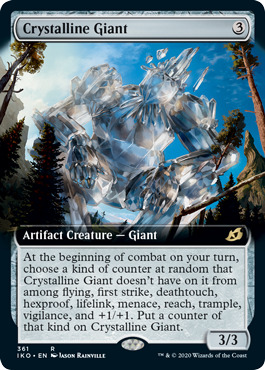 If you have a D10, then that is perfect. There are 10 different counters, so a roll of 1 would grant flying, a roll of 2 would grant first strike, and so on. You would just follow the printed order of abilities listed on the card. If this leads to a kind of counter that Crystalline Giant already has, then you reroll (and keep rerolling until you succeed).

If you only have a D20, then you can avoid excessive re-rolls by assigning 1-2 to flying, 3-4 to first strike, and so on. Reroll if you have the counter already.

Can you use punch-out counters in a dice bag?

If you have a nice dice bag that you cannot see through, then you could put 10 punch-out counters inside and ask your opponent to blindly pick one from the bag. Before doing this, both players should verify that there is exactly one copy—no more, no less—of each of the 10 possible counters inside the bag, and the contents of the bag should be mixed up properly. This is akin to discarding cards at random by pointing at them, as in the first clip.

When using the punch-out counters found in Ikoria boosters, you need to remove the duplicate flying counter and duplicate +1/+1 counter first.

What if you only have one or two D6?

Here it gets a bit trickier. What you should NOT do is roll two D6, add up the numbers, and use that sum in the same way as for the D10. The main problem with this approach is that it doesn’t produce uniform probabilities. For example, you’re far more likely to roll a total of 7 on 2D6 than you are to roll any other sum. Also, rolling 1 on 2D6 is literally impossible. So please don’t do this.

However, there is a good solution. If you only have a D6, then do the following:

With this process, each admissible outcome has the same probability. That is what we need to properly choose “at random” in Magic.

What if you only have a coin?

But there’s a way to do it. We need to flip four coins, let heads represent 1 and tails 0, and note down the results on a sheet of paper. For example, heads-tails-tails-heads yields 1001. This can be viewed as a binary number which is converted to 9 in the decimal system. The ninth ability printed on Crystalline Giant is vigilance, so that’s the ability it will gain.

If you reach any other outcome or a kind of counter that Crystalline Giant already has, you’ll have to reflip all four coins again.

Is there a possible home for Crystalline Giant in Standard?

Looking over the set of Mutate creatures that have been previewed so far, I am most excited by Snapdax, Apex of the Hunt, so I decided to build around that and see where that would lead me. As Snapdax is an expensive Dinosaur, I dusted off Marauding Raptor, which led me to Rotting Regisaur, which is still best friends with Embercleave. After selecting early drops that are good for Mutate and not terrible when you control Marauding Raptor, I arrived at the following list.

4 Knight of the Ebon Legion

4 Snapdax, Apex of the Hunt

Even in this deck, Crystalline Giant is far from a standout card. It does showcase some of the new things that will be possible with Ikoria, but frankly I don’t have high hopes for Standard play.

Maybe that’s a good thing. In paper, the abilities will be annoying to track—you’ll need pen and paper if you don’t have the right counters—and doing all the rerolls will be time-consuming. As much as I enjoy designing random processes with dice or coins and sharing them in this article, I hope that cards like Crystalline Giant won’t become too commonplace.