There are certain cards that stand out because they are so obviously busted in half. You know what I’m talking about—the kind of card where you literally have to read the card three times to be sure it does what you think it does.

I remember when I went to the Betrayers of Kamigawa prerelease and opened an Umezawa’s Jitte and had to read it five times. In fact, five times wasn’t enough because I called a judge over and had him reassure me that the card worked the way I thought it worked.

I feel like I may have already set myself up for failure by mentioning Verdurous Gearhulk’s greatness in the same breath as Jitte, but I’m going to try and win you over. The Betrayers prerelease story was just too good not to drop in. Gearhulk may not be on the same level as Jitte, so let me draw a more appropriate parallel:

Yeah, I went there. Go big or go home, right? So far in the testing that I’ve been able to do (which is ample) the Hulkster has done nothing but impress the living heck out of me. So much so that in pretty much every deck I’ve tried it, I felt it was the best card and I wanted the full 4 copies.

I don’t want to get into a debate about whether Sylvan Advocate is a better card. Comparing 2- and 5-drops is kind of silly because they are so completely different. The fact that these cards are going to see a lot of side-by-side play only improves the stock of both.

One of the best decks that I’ve been able to assemble so far is a GW planeswalkers deck that enables the Hulkamaniac to do absurd things.

So, a lot of the things going on in this deck are going to be a review of last season’s GW Tokens deck that don’t really need too much explanation. The strategy is already a proven winner, so I’m going to spend my time discussing the changes I’ve made that make my list different.

All things considered, the main deck is tight but the sideboard can be better focused as we get a better idea of the decks in the format. The deck is one of the best decks in the playtest gauntlet so far, which is why I decided to feature it today.

My version of GW is much more aggressive than the deck was last season, in no small part thanks to the inclusion of Gearhulk. It is significant that it can come down on a board and suddenly make your small tokens larger than the creatures your opponent was hoping to block with. Even a stray Gideon Ally token can shoot up to a 6/6 and brawl through basically anything.

There are also a lot of games where the Hulk can come down and straight-up buff your team in such a way that no good blocks are available.

Another place where the Hulk has really shined:

You can regularly buff some number of creatures out of range of Return. The same can be said of beefing up the team to attack into Avacyn mana. A few times, if my opponent had Avacyn on a board where it would typically be great, the Hulk came down and their blocks became much less appealing.

One last endorsement for Gearhulk: the second Gearhulk feels a lot like the second Siege Rhino. The first one is typically great, but the second is backbreaking. Placing +1/+1 counters on the trample body of the first Gearhulk and sending it into the red zone feels filthy… 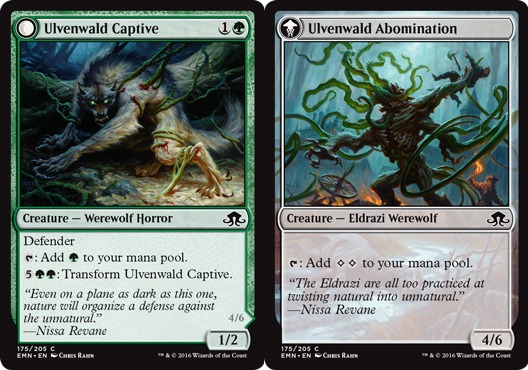 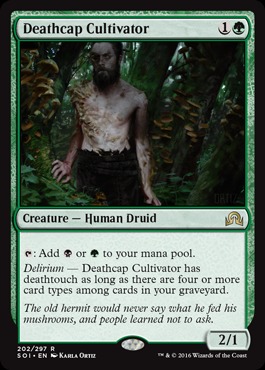 I’m fairly certain that a split isn’t correct, but with that being said, I can’t decide which one I like better and am open to suggestions.

The Cultivator is likely the best card, and I like that it can attack in an aggressive Gearhulk deck. It also isn’t unreasonable to achieve delirium in the planeswalker deck, which gives it added upside as a late-game attacker or blocker. The drawback is that it gets embarrassed by Liliana, the Last Hope.

There are few things more miserable than getting your 2-drop mana dork value-murdered by a planeswalker on the draw.

Ulvenwald Captive solves the Liliana problem, but the fact it can’t get aggressive early is a real drawback. Yet, transforming the Captive has come up and was very relevant. So, both cards have pros and cons, which is why I continue to try out both.

I have been happy with the inclusion of mana dorks in the deck for a couple of reasons: first, the 2-drop spot is severely lacking for a GW deck outside of Advocate and Declaration in Stone (which are both A+ cards). We lose Dromoka’s Command (which is easily replaced by Declaration), but no Dromoka’s Command makes Lambholt Pacifist a much less appealing option in the main deck.

I know what you are thinking: “BUT YOU HAVE FOUR GEARHULKS!” and I considered and tried that. The problem is that DromComm on turn 3 and attack for 4 is way more impactful than waiting until turn 5 to attack. I’m open to the possibility that I’m wrong, but I wasn’t impressed with Pacifist in a world without Command.

On the other hand, I have been very impressed by the mana dorks in the deck. They create the opportunity for some pretty absurd draws.

I also love the fact that a turn1- Oath of Nissa can often draw into a mana creature, or something nice to cast if you already have the mana creature. All things considered, they lend themselves to a lot of explosive draws.

Last but not least…

There is nothing more satisfying that going straight-up Iggy Koopa on a UW Spirits deck… Obviously, coming down and blasting a Spell Queller out of the sky is best-case scenario. I also love that it gives you some more wrath insurance (8 ‘walkers and Westvale Abbey) and can be crewed pretty easily with creatures that might not be big enough to attack into a robust, ground-stalled board. The card competes for a main-deck spot with Avacyn (because nothing competes with Gearhulk) but I’m willing to give it the reps right now to see if it plays itself into or out of my list.

The biggest takeaway for me in my first week of testing is that Verdurous Gearhulk is the truth. My first GW Tokens list had 1 copy and very quickly leapt up to 4 based on performance.

The 5-drop Nissa looked so impressive on paper and was the reason I started with GW ‘walkers, and ultimately didn’t even make the cut! How embarrassing—the insane new ‘walker gets cut from the planeswalker deck!

The fact of the matter is that it was directly competing for spots with Gearhulk, which has performed much better. If that weren’t enough, there was also tension around the fact that I often couldn’t play it because of my 3-drop Nissa. Double fail! So, if you were wondering about the absence of 5-mana Nissa in my GW ‘walkers deck, that is the story.

I’m actually a little bit apprehensive to call this a planeswalker deck because it is actually secretly a Sylvan Advocate, Tireless Tracker, Gearhulk deck! Not that that is a bad thing—I mean, who doesn’t like to Hulk Smash?