There are a myriad of reasons why this piece of micro-fiction, often falsely attributed to Ernest Hemmingway, works. The brevity and efficiency of language, the tragically ironic framing, the perfect utilization of the Rule of Three. But if there’s one element that I want to talk about as it pertains to Magic’s flavor text, it’s the perfect balance between the abstract and the concrete.

This equilibrium is one of the most important for a writer to master as both separate halves are essential elements to engaging a reader. You need abstract ambiguity to grip a reader, to give them something to think about, to paint a scene in their head without dedicating half your word count to literal set description. But you also need clarifying concrete images and ideas to not leave your reader stranded in a sea of metaphor, so that they themselves have something to grip onto.

To show what I mean, here’s that same short story, but now ruined with just the slightest shift in this clarity/ambiguity balance:

For Sale.
Baby’s Shoes.
He Died.

Notice how this story is now bad and also sucks? We’re no longer able to arrive at the grim conclusion to this narrative on our own, instead the exact reading we’re supposed to have is spelled out before us.

Flavor Text and Art in Magic

The following article discusses, in part, the often negative representation of people with visible disabilities in media. It important to note that I am not a person with a visible disability and any discussion of a group of people is incomplete without their direct input and lived experience. While I have clarified the content of this article with friends of mine who have disabilities, I would encourage you to go on and listen directly to people with disabilities, either in your life or through their work on platforms like YouTube. This video is a good place to start if you’re unsure.

You may be familiar with this exact same thing from one of Magic’s most infamous piece of flavor text, that of Innistrad’s Ancient Grudge, where the writer/editor majorly overextends the necessary clarity of their epitaph. 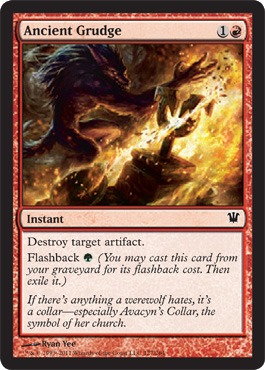 If there’s anything Werewolves hate, it’s a collar–Especially Avacyn’s collar, the symbol of her church.

If this card was a gymnastic routine, this flavor text is the equivalent of a stunning dismount, swiftly followed by a belly flop onto the gym mat. Let’s break the two major narrative elements of this card down: The art and the flavor text.

When people say “A Picture Is Worth A Thousand Words,” they don’t just mean that it is more efficient to show an object or a scene than to describe or explain it–they also mean that a picture can have a whole range of different interpretations and could be trying and succeeding to say many different things. With Ancient Grudge’s art, for example, we see a werewolf absolutely wrecking shop in a graveyard by ripping a tombstone into pieces with one hand. This tells us several things: Werewolves are swole as hell, Werewolves are angry as hell, Werewolves are encroaching onto civilization, Werewolves aren’t fans of the church, Werewolves understand symbolism, etc. You could look at this piece for hours and draw any number of metaphors from it, but usually what you do immediately after your primary, cursory glance at the card’s art and mechanics, is read the flavor text. This is where the first half of this flavor text could have had a profound impact on the potential reading of this art. Suddenly what some people may have just seen as a simple “ME ANGRY ANIMAL WHO NO LIKE GOTHIC ARCHITECTURE” image gets a completely new context as a symbol for a specific conflict, both literally and philosophically, between Innistrad’s Werewolves and its Church. The final flavor text still does do this, but it’s massively overshadowed by the “Ugh, Yeah, we GET it” feeling that comes with unnecessary explanation that comes after the hyphen.

Flavor text, by nature, will always explain a piece of art in some way. Adding clarity and context to a piece can be used to great effect to sharpen the relative ambiguity of any given piece of art into a much more focused idea, message or story. This is displayed in no better way than in Reckless Cohort. 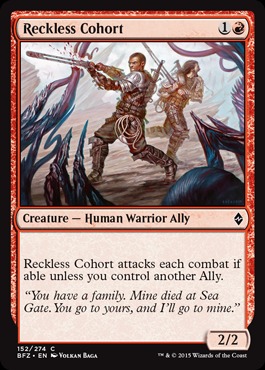 Take its art in a vacuum; we see two Zendikari warriors battling an encroaching Eldrazi horde. The framing of the piece suggests this could go either way, with the human landing a devastating blow on one of the Eldrazi, but the foreground of the frame is dominated by the bones, talons and limbs of anywhere from one to four more drones, and they’re getting very close. All this is to say that we’re focused entirely on this battle… and then that flavor text hits us.

You have a family. Mine died at Sea Gate. You go to yours, and I’ll go to mine.

By giving clarity and a concrete character to the man in this art, this piece takes on a whole new meaning. Suddenly what was simple exertion on the face of this man as he battled the Eldrazi hordes has become a determined and tragic fury. The woman in the background isn’t just fighting the Eldrazi with this man, she’s fighting to save her comrade from his own self-destruction. Or is she moving to honor his wish, to cut her way through the throng and flee? The name and art of this card are the Baby Shoes. For Sale. and the flavor text is that sudden jolt of clarity and context of Never Worn that cuts through this piece’s non-specific message, to give it a dramatic, pointed and unexpected meaning. But sometimes opportunities for fresh interpretations are foregone, and instead we get predictable or even detrimental readings of cards distilled into and promoted by flavor text. 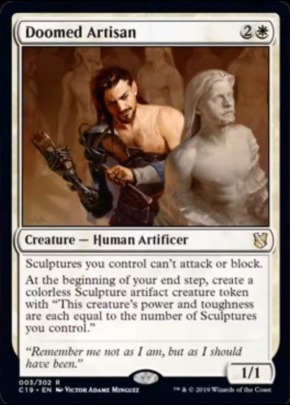 This is where we get to the card that made me want to write this article: Doomed Artisan.

If you were on Twitter, like I always am (in fact, I’m on it right now and YOU CAN’T STOP ME), when this Commander 2019 card was previewed you may be aware that this card was divisive. Not mechanically, but in terms of its representation of a person with a visible disability. There was praise for how this card show an amputee engaging in a profession that requires a high degree of dexterity and skill to succeed in, but there was an equal amount of disappointment that this card seemed to promote the tired clichés of both the Tortured Artist and the Tortured Person With Disabilities. Now if, at this point, you find yourself wondering “Well, what does it matter? Representation is representation.” it’s vitally important to understand that media that reinforces negative stereotypes of minority and/or vulnerable people or groups have a direct and detrimental effect on how people in the represented group are treated in real life. When the prevailing narrative about people with disabilities is–as it is in lots of our media–two-dimensional and stereotypical, then general audience’s assumptions, opinions and treatment of those individuals in reality (be it personally or politically) shifts to reflect that. When audiences are consistently told that people with disabilities live lives of constant emotional and physical pain and that their disabilities makes them less of a person, then people start to accept that as the truth.

Well, it’s kind of both at the same time. Let’s do as we have done for the other two cards and take the art in a vacuum first. We see a scarred sculptor, chiseling a block of marble in a dingy studio. He has a prosthetic arm and he’s sculpting a statue of what looks to be himself, only with no scars and no prosthetic. He is surrounded by at least half a dozen of these statues, if not more, lurking beyond the light. What does this tell us about this character? First, he’s a man with a visible disability and he’s a phenomenally talented and dedicated sculptor. Secondly, he’s obsessed about this image of himself without these scars. How did he get these scars, and why is he obsessed? We don’t know for certain, and we can project any number of reasons onto this character with the context clues we’re given. Probably the most apparent reading you can have is that this man wishes for a life where he looks like his sculpture. But his talent is still so undeniable, so front-and-center that you could also just as easily read this piece as a metaphor for the needless quest for perfection. Could this Artisan be challenging those who would doubt his abilities simply because of his disability? Could he be distilling his nay-sayer’s perception of his flaws as sculptures as if to say “Who are you to call the man who can conjure perfection from marble imperfect?” In a vacuum, you could very easily make an argument for any of these readings. Unfortunately the vast majority of the replications of this art don’t exist in a vacuum.

The card Doomed Artisan, which is in-of-itself not a great name, has a short line of flavor text: Remember me not as I am, but as I should have been. Much like the flavor text of Ancient Grudge and Reckless Cohort, this has the effect of clarifying the context of this piece which serves to refocus your attention onto a specific aspect or message of this art. Unfortunately, here this text serves not to promote the skill of this sculptor or provide an entirely fresh and new interpretation of this character, but rather to boil the potential complexity of the portrayed character down to his disability and how much he feels like an aberration because of it. This doesn’t mean that alternative interpretations can’t exist or are invalid, but it does make the least charitable reading of this art the most “canon.”

This doesn’t mean that Victor Adame Minguez intended this to be his art’s interpretation, in fact I highly doubt that his intent was to create anything other than a kickass piece of art with a badass sculptor front and center of it. It’s really unfortunate that the contextualizing aspects of this card that could have diminished the largest potential problematic reading of this art instead exacerbated it. This is made more unfortunate and notable as Magic really doesn’t have that much in the way of representation for people with visible disabilities. Outside of the denizens of Esper like Breya, whose etherium augmentations fall more into the camp of transhumanism, the notable characters with visible disabilities in magic are a pretty small bunch and include Daretti, Teysa Karlov, Yisan the Wanderer Bard, post-Rath Tahngarth, and maybe Urza at a stretch. It’s important that the people on the creative side of card design listen to and consult members of a group they’re trying to represent if they’re going to discuss, even in passing, something that sets this character outside our cultural “norms,” be that in terms of disability, race, gender or anything else.

Flavor text can have a massive effect on the tone and message of a piece of art, just compare how the flavor text of Invasion’s Obliterate gives the art a wildly different vibe to the same card when printed in 8th Edition. If Magic’s art is a loaded cannon, then flavor text is a pirate with an eye for maximum impact; this transformative quality is as powerful as it is subtle and I look forward to seeing more Reckless Cohorts and fewer Doomed Artisans in the future.