2-mana kill spells are prized, even ones that don’t hit every good creature in Standard. This notably misses The Scarab God, Kari Zev, Hazoret (for multiple reasons), and Raff Capashen, plus others that will emerge as the format evolves. Still, hitting everything else, from the lowly Bomat Courier to the mighty Torrential Gearhulk, makes it appealing indeed. It might impact Modern as well, making it a welcome addition to the pantheon of removal spells. 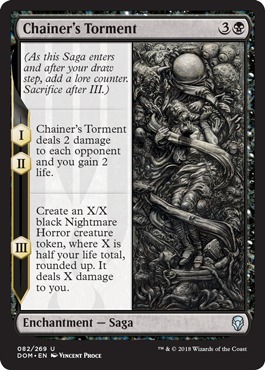 If this were a large creature that drained the opponent for 4 immediately, I’d be a lot more interested. As is, it takes a couple turns to get rolling, and that makes it a tough sell. This could be the top end of a very aggressive black deck, but it’s probably not quite there. 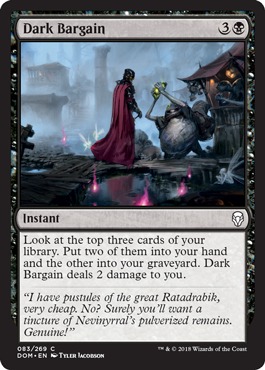 The black Glimmer of Genius is kind of sweet, and adds a new option to a color that doesn’t have a ton of card draw. This gives controlling black decks a way to draw cards even when they’re not paired with blue, and has minor graveyard synergies while it’s at it. That’s a bargain for 4 mana, and I wouldn’t be surprised if this showed up in multiple archetypes. 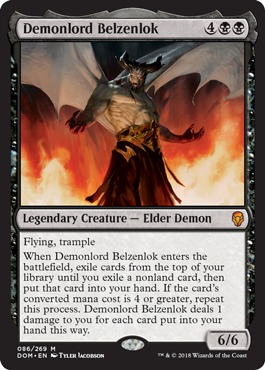 You could technically build a deck of all 4+ cost cards and go off, but all that would end up happening is you draw a million expensive cards then die to Belzenlok. Instead, I’d look at using this as a finisher in a control deck, hoping to get 2-3 cards every now and then. 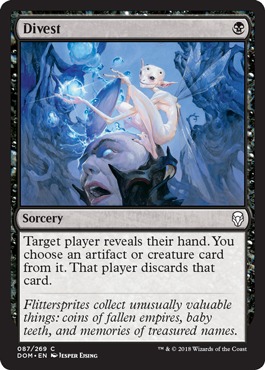 These cards always play worse than they look. Duress is such an effective sideboard card because you get to board it in against decks that hold spells, even late, making it rarely a dead draw. Divest needs to be drawn early, and even then is a 1-for-1 at best. That said, this hits enough cards that it could provide early interaction for decks that struggle with it, and Standard is becoming infested with creatures. I’d look to sideboard this against decks with 25+ hits, and if they don’t exist, that’s a sign this isn’t getting there. 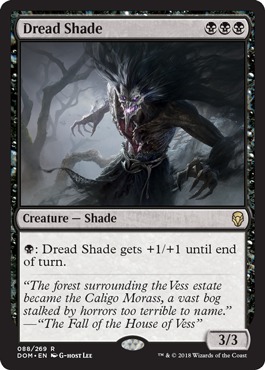 Take this rating with a grain of salt—it’s predicated on mono-black being viable. There are some decent pieces for it this time around, and I know people are going to try it, so I’m starting Dread Shade with a pumped Constructed score. The power level is here, so all that you need next is the proper support. A 3/3 for 3 that threatens to hit for 8+ is scary, and this can run over midrange decks like nobody’s business (while also blocking reasonably well against aggro and killing control in a couple of hits).

I do like 3-for-1s, and reanimating planeswalkers in addition to creatures is quite powerful. For this to be good, you need to be fighting against a slow deck that has creatures (but not too many cheap ones), which is a rather specific ask. I’d look to try this as a sideboard option against midrange. 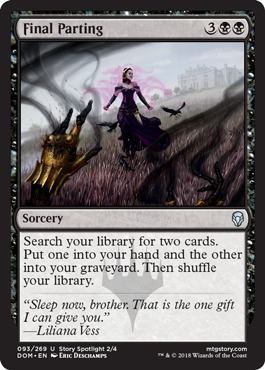 If this ends up seeing play, it’s as some goofy combo enabler. Paying an extra 2 mana to staple Demonic Tutor to Entomb is not that unreasonable, as both cards are absurd, but you’d need to be doing big things to make up for spending 5 mana and not affecting the board in any way. The obvious combo is reanimation spell + big creature, but I’m sure we can do better. 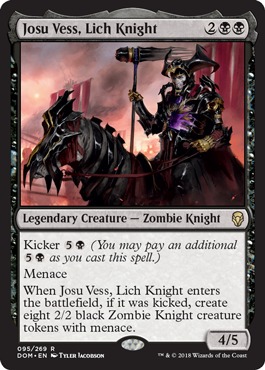 Josu isn’t quite priced to move in Constructed, but it does provide a solid body and a formidable high-end threat. That’s enough to get me to pay attention, and may end up being a way for mono-black to close out games. 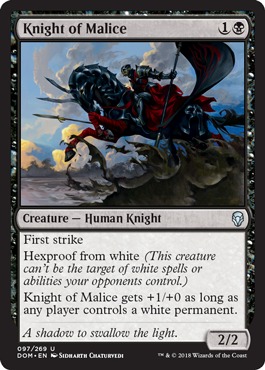 Knight of Malice is a solid beater with a decent protection ability, even if white typically has less good removal than black. If there’s a black aggro deck and small creatures are running rampant, this could make an impact. 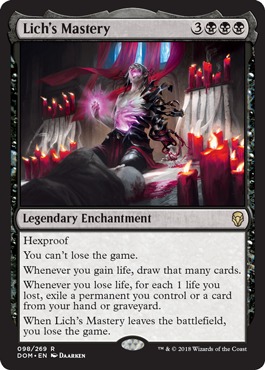 (A rating of 0 doesn’t cause Lich’s Mastery to lose the game.)

I think this card is really sweet and evocative, but too expensive to master Standard. It combines well with self-mill, as your graveyard is essentially bonus life, but for 6 mana you can do all sorts of obscene things in Constructed. It would be cool if this worked out, but it seems pretty difficult for all the pieces to come together. 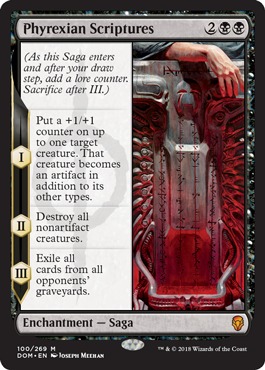 Wrath with a one-turn delay is way less good in Constructed than Limited, even if you get to keep most of your creatures (assuming this goes into an artifact deck). This could prey on midrange, as that’s the kind of matchup where creatures stare at each other and the games don’t end instantly, but given how many times I’ve said that this review, I’m feeling skeptical that too much midrange is going to flourish. 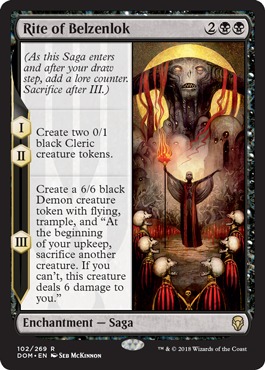 Getting four tokens and a Demon is a solid deal for 4 mana, even with the delay. In a token-based sacrifice deck, this could provide multiple relevant things (tokens and a finisher), which might make it the rite card for the job. 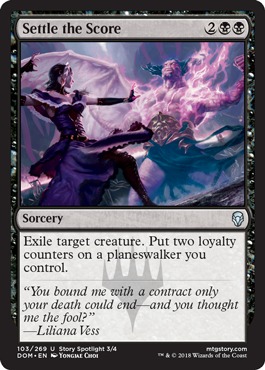 Paying 4 mana to kill a creature at sorcery speed is a lot, but ticking up a planeswalker twice could let you ultimate out of nowhere. This provides a powerful unique effect, even if you need to have a planeswalker in play to get max value. I don’t think this will see a ton of play, but it will be so sweet when it works. 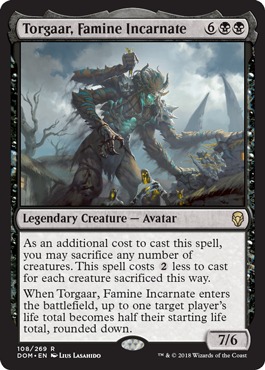 Somehow, Torgaar is one of the better cards in the set for Modern play. The combination of Lingering Souls and Goryo’s Vengeance makes this a big monster that comes out for cheap and eats into the opponent’s life total. I also could see it doing some damage in Standard, as there are a bunch of pretty solid ways to make tokens in the format. Having this reliably come out for 2 mana is a powerful effect, and this could quietly feast on opponents in multiple formats. 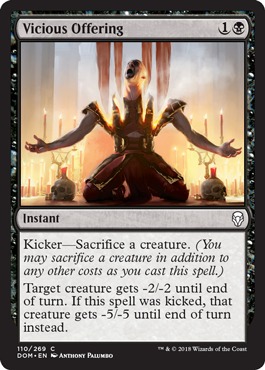 Neither mode is above the bar in Standard, but the combination of the two could push this into some decks. It does kill Hazoret, The Scarab God, and Glorybringer, as well as being an early play, so I’ve seen worse offerings. 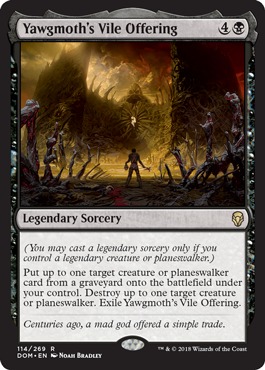 The offering may be vile, but the power level is not. This does require a real board presence to be played, which is often not when you need removal, but stealing a creature from any graveyard is a good enough upside that this is worth building around.

Black has an odd collection of cards, though getting a removal spell, a card drew spell, and an interesting threat is a decent top three. Rite of Belzenlok also seems very appealing to me, so there are plenty of new things to try here.