If the Magic Online Championship has taught us anything about the Standard format, it’s that you’re probably making a mistake by playing anything other than Mardu Ballista or 4-Color Saheeli. That said, who cares about making mistakes when there’s fun to be had?

The Eldrazi show up every now and then in various Standard builds to smash face. Without access to lands like Eye of Ugin or Eldrazi Temple, they aren’t as undercosted as they might be in other formats. They’re still big awesome monsters with sweet abilities.

Reality Smasher does exactly as the name would imply. A 5/5 for 5 is already tough to deal with, out of range of both Fatal Push and Grasp of Darkness. If they do have the Murder or Unlicensed Disintegration, they’ll also need another card to discard. They’ll also have likely taken a chunk of damage.

The early aggression is powered by a pair of 3/2 creatures. Scrapheap Scrounger’s job is to attack, attack again, come back from being killed, and keep attacking. Somewhere in the middle it may crew a Vehicle, but it’s only planning on driving back into the red zone for more attacks.

Matter Reshaper offers a little more, such as the ability to block, but is similar in that you’re never upset to trade it for a card. Matter Reshaper’s dies trigger is pure value.

Walking Ballista is under-powered and over-costed by Eldrazi standards, but it’s insurance against flood and an interactive spell against both early creatures and Saheeli Rai. 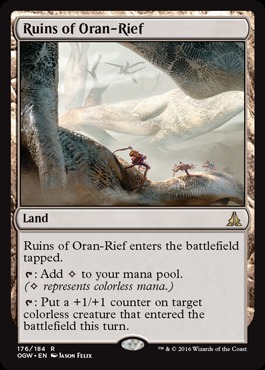 All of these creatures go beautifully with the full playset of Ruins of Oran-Rief. This land may enter the battlefield tapped, but colorless almost counts as fixing when you’re casting Eldrazi, and the counters are valuable. Putting bonus counters on your Ballista gives you a payoff on those turns when you have an odd number of mana available.

Baral’s Expertise is the card that makes the Eldrazi interesting again. This is a huge tempo play that clears out an entire army of blockers. Following that up with a removal spell or another Eldrazi should end the game quickly. Baral’s Expertise goes even better with:

Thought-Knot Seer is an awesome creature as a 4/4 for 4 that can disrupt your opponent’s game plan. Yes, they’ll get the card back if they’re able to kill the Seer, but that’s easier said than done, especially when you can take a removal spell. Bouncing their team and using the free spell on a Thought-Knot means you now can take whatever their best creature or artifact in play was. Well, if you like value, that is.

Cultivator’s Caravan offers ramp into Expertise and Reality Smasher, color fixing, and can smash in there thanks to your 3-power creatures.

The removal suite is centered around Fatal Push and Grasp of Darkness. This should handle all the early creatures before Thought-Knot and Expertise clean up what’s left. Transgress the Mind can also make sure the opponent is playing off-curve, remove their answers, or is another nice spell to play after Baral’s Expertise.

The Eldrazi have come in many different incarnations, and here’s another you should definitely try out if you’re not interested in playing the same old Standard.

TGNYN, 5-0 in an MTGO Competitive League