The Metalwork Colossus deck has an incredibly favorable matchup against G/B, but Mardu is a real challenge, as is Jeskai Saheeli. As the format continues to evolve, G/B has basically been pushed to tier 2, so what would make a Colossus deck strong right now? Well, the Saheeli deck has moved away from the cards that are strong against Colossus, such as Disallow and the most problematic white sideboard cards, and the Mardu deck has slowed down to incorporate playsets of Walking Ballista and Fatal Push. Both cards that are horrendous against Colossus! 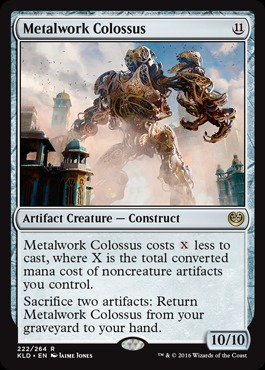 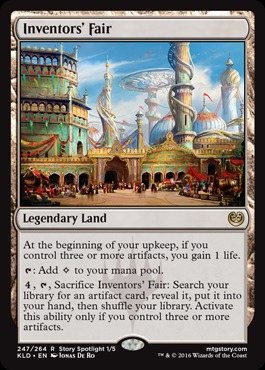 Metalwork Colossus is a 10/10 creature that can occasionally come out on turn 4, but that you can expect to start firing away on turn 5 rather consistently. With so many artifacts and so few color commitments, Colossus decks can load up on the important lands to get things going. Inventor’s Fair will provide a nice life buffer early on before searching up a Colossus. Sanctum of Ugin allows you to play 2 or more Colossus on the same turn.

Sanctum of Ugin also enables Elder Deep-Fiend. Colossus doesn’t have trample or flying, so the Deep-Fiend will clear the path you need to make sure you can win the game. You can crew a Vehicle with whatever you’re going to emerge, and if it’s a Colossus, you can bring it back and cast it again. This is also a great way to buy time or stop a control/combo deck from enacting their game plan. 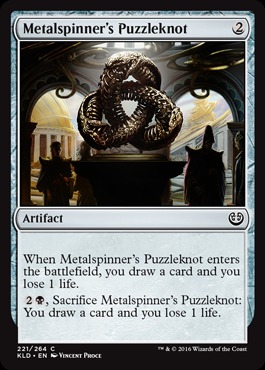 To enable an early Colossus, you need early artifacts. Prophetic Prism and Metalspinner’s Puzzleknot both reduce the cost by 2, draw a card, and offer additional upside. You also have lots of “mana rocks” that have value in the late game. Cultivator’s Caravan reduces the cost of Colossus, ramps mana, fixes colors, and then can start attacking. If you don’t need to tap the Caravan for mana, Colossus can make sure you get in for 5 (Colossus decks are great at attacking in chunks of 5 and 10!). Hedron Archive can single-handedly cast a Colossus on turn 5 with no other artifacts if you hit your land drops. If instead you’re able to play artifacts for 2 and 3 before the Archive, you’ll have 9 in play and can tap the Archive for a turn-4 Colossus. 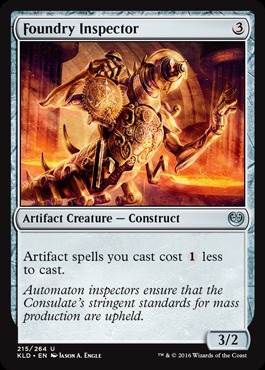 Foundry Inspector is not played in all versions of Colossus, but it’s a nice way to accelerate out most of the cards in the deck. It also crews a Vehicle in a pinch.

Skysovereign, Consul Flagship is now played in the sideboards of many decks in the format. It works here as a great main-deck spell to control the board of creatures and planeswalkers. Once you crew it and start attacking, the game will spiral out of control for your opponent.

Walking Ballista is an okay early play, a great sink for excess mana in the late game, and even a way to trigger Sanctum of Ugin to find Colossus.

The removal suite for this deck is much different from what I’ve seen in any other list. 4 copies of Fatal Push is pretty standard. It’s not easy to trigger revolt, but you do have emerge, Colossus, Puzzleknots, Archives, and some lands that sacrifice. Warping Wail is different, but it can kill Toolcraft Exemplar, provide ramp, or counter a spell like Release the Gremlins.

Baral’s Expertise may be a game-changer as the format slows down. Bouncing 3 creatures buys time, bouncing 3 blockers can be lethal, and you even have the bonus mode of bouncing your own artifact, especially if you didn’t have a free spell to cast, for extra value. If you bounce Prophetic Prism, you turn Baral’s Expertise into bounce two creatures and draw a card!

Colossus is one of the sweetest decks in the format, and I think it’s exceptionally powerful. With plenty of awesome sideboard cards for Mardu, in addition to their decreasing speed, that matchup could easily turn favorable. If so, Colossus could be a great choice.