God-Pharaoh’s Gift is one of the most powerful cards in Standard. It’s also one of the most expensive cards to cast, requires setup, and it’s vulnerable to Abrade. U/R Gift decks made a splash before the rotation and bannings, and I personally put a lot of work into Jeskai Gifts. The rotation of Insolent Neonate felt like it killed the deck as that was the major draw to red.

God-Pharaoh’s Gift will give you value every turn, creating 4/4 creature tokens with haste and enters-the-battlefield effects. Gate to the Afterlife requires some setup itself, but it’s a cheaper and more elegant way to get the Gift onto the battlefield. It’ll also get your Gift back if your opponent managed to deal with it. Cheap creatures you can sacrifice or send to the graveyard to gain some life and get some loots will get your Gate online ASAP—and with plenty of fuel for the eventual Gift.

Cathartic Reunion is one of the best spells ever printed to load up your graveyard and dig for specific pieces. This can get Gifts out of your hand to then Gate into play, load up your graveyard with creatures, or simply discard excess lands to find useful threats. Reunion plays a huge role in making these decks functional.

Insolent Neonate may be gone, but you still have cheap creatures that can combo well with Gate. Bomat Courier could be a way to load up your graveyard instantly with an entire handful of creatures, but you’re likely hoping to cash it in for more value after playing your Bomat early. In a pinch, this can turn into new cards, load up your graveyard, gain you a life, and even get a loot out of the deal with a Gate in play. 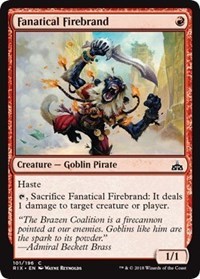 Fanatical Firebrand is perfect for fueling a Gate. It’s good against opposing 1-toughness creatures, like Glint-Sleeve Siphoner, and can get in some early damage before Gate is online. Once there, you can get your ping, gain a life, get a loot, and potentially put 2 creatures in the ‘yard to get a Gift onto the table quickly.

Combat Celebrant is the other red card to make the cut. While vulnerable to just about any removal spell, you don’t mind your creatures being sent to the graveyard. Bringing Celebrant back with Gift lets you exert for an additional combat step and another Gift activation to close out the game.

Champion of Wits is has always been the most important card to these decks. It sets up everything you’re looking to do. Once Gift is on the table, or once you’re flooded with lands, Champion continues to do work. Drawing 4 cards and discarding 2 just gets you more action.

Minister of Inquiries is another early drop that sets everything up. You’re looking to mill creatures into the graveyard, get a Gate online, and turn that into a game-winning Gift. A 1-drop that can put six cards into the graveyard and then die for the team is perfect.

Walking Ballista helps control the board and trigger Gate when you need it. Casting Ballista for 0 with Gate in play puts a creature in the graveyard and gives you a loot for a chance to discard another creature. Ballista for 1 can just shoot down 1-toughness creatures before getting your two loots.

Everything I’ve said about this deck shows you how important and powerful the Gates to the Afterlife are. So what happens if you don’t draw them? Well, you have 4, and Cathartic Reunion and Champion of Wits help make you much more likely to find them. If that wasn’t enough, Trophy Mages can just put the Gate directly into your hand from your library. 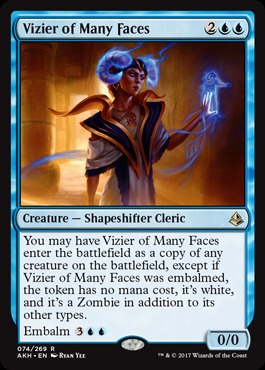 Vizier of Many Faces is not a card you see often in this style of deck, but with plenty of your own powerful creatures to copy, not to mention opposing threats, means that a Clone is always useful. You can embalm the Vizier, so discarding it to Gate loots, Champion, Reunion, or milling it with Minister or Ipnu Rivulet are all options for getting value.

Gift decks do some of the most powerful things in Standard, and U/R is still in the running for best version of these decks.

JSAMOZA, 5-0 in an MTGO Competitive League