There are a number of decks in Legacy that play few or no creatures, but if you’re doing that, then I want to be doing something completely degenerate. That’s why Storm has been my deck of choice in the last several Legacy Grand Prix.

It may seem innocuous, but Gitaxian Probe is key to making decks like this truly successful. Spending 2 life and 0 mana for a card is already a great deal in a deck looking to get a storm count of 10, but the information is also critical. It lets you know what your opponent is working with, what you have to play around, and the best time to actually go for your combo. 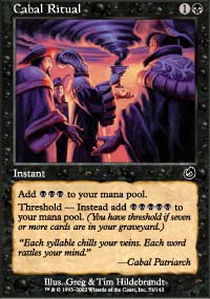 To generate enough mana to cast the spells you need and to generate that storm count, you’re going to need some acceleration. Storm has that in spades. Dark Ritual ramps you from 1 to 3 while Lotus Petal can get you started from nothing. Once you’re able to generate a couple mana, Cabal Ritual will often function as +3 mana, which tends to end the game. 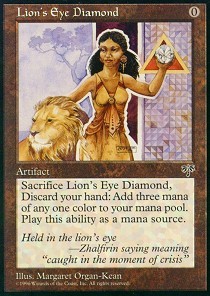 Lion’s Eye Diamond has a pretty substantial drawback in that you need to discard your hand, but it’s truly outstanding in this deck. With spells you can respond to while they’re on the stack by sacrificing the Diamond, you’re looking at a card that’s much closer to Black Lotus in this build.

You’ll  need card selection to dig through your deck to find the right combination of spells to go off. Ponder and Brainstorm are the best, since you’re often looking for 1-2 key pieces. With fetchlands in the deck, you can usually shuffle away the cards you don’t need. Preordain and Sensei’s Divining Top serve a similar purpose, but without the same scalability. They aren’t quite as good at sculpting the perfect hand, so they tend to show up in lower numbers.

You’re very much playing an all-in combo deck, so disrupting the opponent is important. A single Force of Will can spell disaster when you move all your chips in, so Duress and Cabal Therapy will clear the way. Gitaxian Probe in combination with Cabal Therapy is backbreaking to a number of strategies and can stop an opponent from going off before you, in addition to preempting their disruption. 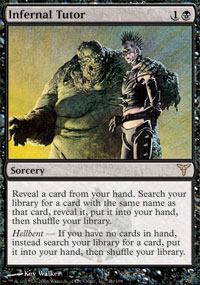 Infernal Tutor is the glue that makes sure you get from point A to point B. The most common lines of play will involve you casting all of your Rituals and Lotus Petal, getting Lion’s Eye Diamonds into play, casting Infernal Tutor, and responding to the Tutor itself by sacrificing all of the Diamonds. If you had any cards in your hand, you don’t anymore, and when Infernal Tutor resolves, you’re hellbent to get anything you want. If you have multiple Tutors in hand, or have what you need for your engine, you can use a non-hellbent Tutor to go get another Dark Ritual, Lotus Petal, or Lion’s Eye Diamond before going off.

When you cast a hellbent Infernal Tutor, you’re looking for Ad Nauseam or Past in Flames. A turn-1 land, Dark Ritual, Lotus Petal, Lion’s Eye Diamond with Infernal Tutor is a threat to win. As soon as you can get to 7 mana with a Lion’s Eye, you can Infernal Tutor, respond with sacrificing Lion’s Eye, and get Ad Nauseam. Yes, you can definitely fizzle from here, but it’s unlikely. If you have 0 mana in your mana pool when you try to go off, you’re going to need to find a Lotus Petal to even get started with most hands (or 2 Lion’s Eye Diamonds and a Past in Flames). With even a single mana available when you cast Ad Nauseam, your chances of winning go up dramatically as you can find Dark Rituals or Rain of Filth to get started. The average CMC of a card in the Storm deck with an Ad Nauseam already resolved is right around 1, so if you have 20 life there’s a good chance you will look at >15 cards.

The other card you may search for if you already have a deterministic kill is Past in Flames. If you have enough Rituals, (artifact mana won’t help with the flashback), searching for Past in Flames will allow you to recast all of your Rituals out of the graveyard, and assuming you had no cards in your hand for the Tutor, will also allow you to flashback Tutor to get Tendrils of Agony for the win. Past in Flames is particularly powerful in this deck because you can cast it for value to draw some extra cards to help find what you need, you can get it countered and go for the win on a future turn, and it doesn’t mind if it’s already in your hand when using Lion’s Eye Diamond (although it will cost 1 additional mana) to get red.

Keep in mind if you’re playing this deck, become hellbent to Tutor for Past in Flames, and need to gain additional Storm before killing with Tutor for Tendrils of Agony, that you will need to Tutor for the Tendrils before flashing back your Gitaxian Probe and Ponder since you will no longer be hellbent once you start drawing additional cards!

Storm is one of the most powerful decks in all of Legacy, and also one of the most fun to play for someone like me. Every game feels like a puzzle with so many moving parts between the mana, the storm, and what your opponent may have. If that’s something you enjoy as much as I do, then this is the deck for you.