A 4-Color Energy deck is nothing new. Energy is a busted mechanic, the cards go hand in hand, yadda yadda yadda. All versions of Energy have some small differences between the lands, the last few flex slots, and the sideboard, but this version has some heavy-hitters.

Oh, and the 4th color to go with Temur isn’t black… it’s white!

Some of the energy cards are pretty much locked in. Those start with Attune with Aether, Servant of the Conduit, Harnessed Lightning, and Rogue Refiner. Any deck playing Temur is going to start with 4 copies of each of these cards. Servant fixes your mana and accelerates on a relevant body. Attune with Aether makes a strong case for being banned in Standard, not because it’s a broken card (it’s Lay of the Land with free energy—that shouldn’t be overly impressive!), but because it invalidates so many of the sweet strategies in Standard that should just be playing Attune and energy cards. Harnessed Lightning is the best removal spell in the format. Rogue Refiner isn’t just a 3-power creature for 3 mana, but it gives you valuable energy that can turn into flying creatures and it draws a card. Yeah, this is a card you want to be playing in Standard.

Whirler Virtuoso had long been far from a lock as a 4-of in Energy decks, but for the most part those days are gone. It’s the best place to sink your energy with Aetherworks Marvel being banned, and it really puts the hurt on both aggressive decks trying to force through damage and control decks trying to trade 1-for-1 on removal spells.

Bristling Hydra is even further from being a 4-of. In fact, 0-2 copies is closer to the norm right now. Hydra is a powerful card, but it’s a little on the clunky side both in terms of mana cost and the amount of energy required to actually give you a benefit. A 4/3 can still be dealt with in combat, and investing too much energy into a Hydra can leave you hurting. That said, with any sort of combat tricks or pump spells that you might find in a Pummeler deck, Hydra is an MVP.

This deck goes much bigger than Hydra, however. I’m talking about 3 copies of Carnage Tyrant as the biggest Dinosaur in town. Tyrant makes opponents looking to chump with Servos and Thopters look downright silly. It can’t be countered, can’t be Harnessed Lightning’d, and it plays well against opposing planeswalkers. It also, conveniently, works well with pump effects. 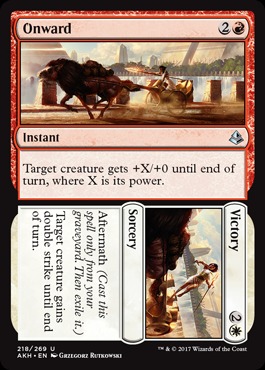 Enter Onward // Victory. This is the white part of your 4-Color Energy deck. This card was barely playable in Limited, yet it can put a pretty big hurt on an opponent. In conjunction with an attacking Bristling Hydra, if it goes unblocked, you can play Onward at instant speed after growing your Hydra and giving it hexproof so you know there will be no tricks for your opponent. This is similar to a Fling to close out a close game. With Carnage Tyrant, or against an opponent with no blockers, things get crazy. You can also aftermath a Victory at sorcery speed and annihilate your opponent. Maybe they were planning on blocking a Carnage Tyrant with a pair of Rogue Refiners and hoped to trade, but Onward // Victory means 14 double striking trample damage is coming through, and that’s going to spell lethal way more often than not.

You need a bit more interaction to survive for your combo finish. Abrade and Magma Spray give you additional early spot removal to make sure the battlefield is under control. Essence Scatter can keep heavy-hitters like The Scarab God or opposing Bristling Hydras from throwing a wrench in your plans. Supreme Will can give you additional interaction by countering a key spell or helping you dig toward your combo.

Energy decks are definitely at the forefront of Standard, but that doesn’t mean innovation is dead. Splashing a little white can lead you to victory!

RA_PO, 5-0 in an MTGO Competitive League