Kaladesh is a world of invention. The set marks the arrival of so many amazing build-arounds and new sweet cards that power up already existing archetypes. Since this is Budget Brews, I’ll be focusing on the former today to make sure that you can hit the ground running—or in this case driving. I clearly can’t have the MTGO tix breakdown for the deck this time around, but I’ll still adhere to the normal build rules best as I can.

Mana bases can be more expensive and that’s okay. Having a working mana base lets you play Magic and cast your spells which is the easiest difference between winning and losing. Sometimes there will be a direct budget replacement such as Foul Orchard instead of Hissing Quagmire. If I’m not running both, I’ll leave it up to you which one you want in your final version.

The Drivers (and their cars)

A race is no good without some stellar drivers. All these racers have different personalities and lend their abilities to the car they drive in different ways. Let’s meet them: 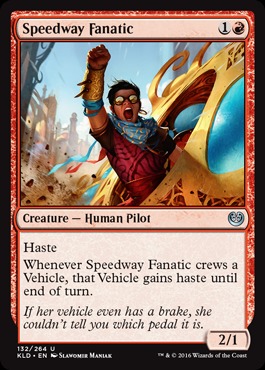 He only cares about speed. Forget handling. Forget suspension. How fast does the car go from 0-60? When he’s behind the wheel, forget your usual 2.8-second answer. Instead, Speedway Fanatic says, “take 5, go”. He allows your deck to play from an aggressive angle and even pokes in for a few damage before taking on the role of crewing Vehicles. The haste isn’t as necessary from the Fanatic, since 2 of the 3 cars in the deck already have haste, but he lets you bash for 5 with Renegade Freighter on turn 3. Your opponent is already at 13 life! That’s a great 2-3 curve. 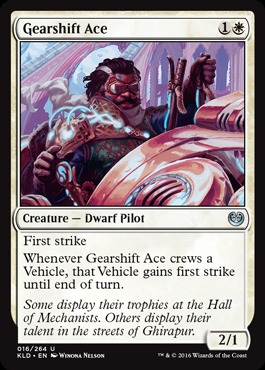 Where the Speedway Fanatic cares about speed, Gearshift Ace exhibits a bit more finesse. He makes sure to hug the turns tightly because that’s really where he gets the most edge in the race. Anyone can handle straightaways, but this guy only feels something from maneuvering a tricky spot on the track with perfection. That’s why he perfectly crews Vehicles in situations where they otherwise couldn’t race at all. Imagine your opponent has two 3/3s and you have Ovalchase Dragster with Gearshift Ace. Good luck blocking!

While this racer has been around the block a few times, don’t let his looks fool you. A few wrinkles are nothing to scoff at when he leaves the rest of the pack in the dust. Veteran Motorist takes what Speedway Fanatic and Gearshift Ace do best and combines them together to help him win. If there’s a tricky spot, he’ll ensure that he takes the turn with grace only to slam on the gas coming out of the turn to get ahead of the competition. On the straightaway he cranks up the +1/+1 to help get past the finish line. If you pick him to crew a Vehicle, you’ll never be disappointed since he’ll guarantee a better situation than you were in before. That is unless it’s turn 3 and you just cast Renegade Freighter. Maybe just attack for 3 instead there. Yeah, that’s definitely better.

They don’t call him “The Responder” for no reason. Any good race team knows that it’s important to have good drivers, but you also need a good pit crew. This guy doesn’t actually get behind the wheel all that often, but he’s always there on the track making sure things are going the right direction. When a problem arises he’s there to make sure defense is an option. When planeswalkers are busy causing problems he’ll head on over and poke them for 2. Don’t just discount this gentleman because he lacks true driving prowess. Behind-the-scenes work is often just as important. 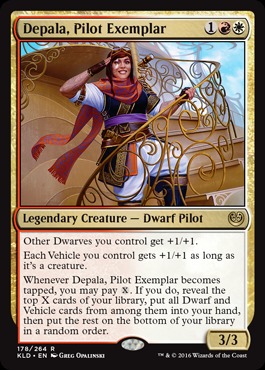 We’ve saved the best pilot for last. Depala frequents the race often and almost always comes in first place. She’s a team player though, and prefers relay races so she can empower her fellow Dwarves. While she appreciates Speedway Fanatic’s love of racing, he’s just a little too brash to warrant her help. Cars seem to go faster when she’s behind the wheel, and she has good connections as well. Right when you think you’ve seen it all, she calls up her Uncle Jabinoff who has a whole slew of shiny new Vehicles waiting to be deployed. Just make sure you have enough mana ready to pay the costs because those new cars aren’t cheap.

There are drivers who make the race worth watching. There are cars that are shiny and zoom around the track. But none of that would be in effect without a supporting cast that makes the whole operation viable: 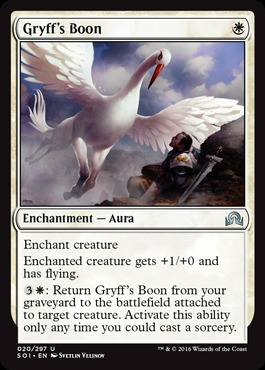 This may look like an odd inclusion but sometimes you just need to take to the skies. Planeswalkers can be troublesome since they stabilize the ground and take out key creatures. Gryff’s Boon makes sure you can take them out with one hit of a Vehicle, and can also send a super crewper airborne for some repeated damage if need be. Note that when a Booned Vehicle stops being a creature the Boon will fall off, but the idea is you won’t need to have a flying Vehicle for very many turns before you win the game. It lends some flexibility to an otherwise linear deck. 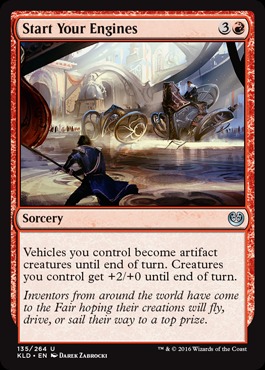 Where Gryff’s Boon is nuanced, Start Your Engines gets your Vehicles and drivers excited for the home stretch. Simply cast it and watch as your opponent scoops ’em up and reaches for the sideboard. Note that it pumps all your creatures which is very relevant since this deck won’t actually trade creatures all that often (since they’re crewing Vehicles most the time). This means the board will slowly go wide and that’s the perfect time to pump everyone and swing on in. The fact that many of your Vehicles will have trample means this also grants a ton of evasive power to the board. Vroom, vroom!

Most of the sequencing of this deck will be straightforward, and the idea is to keep crewing Vehicles and dealing consistent damage. Some creatures do combine better with certain cars, so the choice of playing Speedway Fanatic or Veteran Motorist on turn 2 will depend on whether you have a Renegade Freighter ready for turn 3. Additionally, you should think about the ways your opponent has to interact with you and their plan. You might want to lead on an Aerial Responder turn 3 rather than Depala if your opponent is trying to race you or has lots of removal. That way you either stabilize or present a weaker threat to kill, which helps protect Depala and provide a steady flow of Vehicles over the coming turns.

Another consideration is whether to play a creature or Vehicle onto an empty board. You’ll often want to play the Vehicle first because it is more expensive than the creature you’d be considering and also sets up for a stronger follow-up play of creature, crew, and activate. Of course, that’s all context dependent and part of the cool thing about this deck is the mixing and matching of crew creatures to Vehicles. They all interact in slightly different ways and are more useful under different scenarios. This allows the deck to adapt to changing boards more easily than some other low-to-the-ground aggressive decks, and makes it less of a one-trick pony than it might otherwise appear to be, despite an overall linear game plan. I’m excited to crew up all these Vehicles as soon as Kaladesh hits the shelves!

I didn’t include a sideboard because I simply don’t know what you’ll be sideboarding against. This will also be the type of deck that you’ll want to sideboard with less. You can’t just take out a bunch of creatures because then you’ll have nothing to crew with, though you can include different assortments of creatures which can better accommodate certain matchups. In addition, you’ll want access to some different interactive removal spells like Galvanic Bombardment but which exactly is not a known quantity yet.

As for deck upgrades, you’ll have to shift the focus of the deck when adding in money cards. As is, the deck is more of an aggro-combo deck revolving around crew 2. You could go bigger and play Skysovereign, Consul Flagship, or smaller and include aggressive 1-drops, but either direction will require a redesign of the supporting cast. Those options do sound like fun alternatives, so I encourage your brewing mind to fly free and innovate like the Kaladeshians.