With Brawl now enjoying all the fame and fortune that comes with being one-seventh of a real Constructed format, it’s steadily picking up more and more fans. However, given the reluctance Wizards is showing in giving Brawl more airtime, it’s reasonable enough to hesitate before incinerating wildcards purely for this part-time format.

Rare and Mythic wildcards are a premium resource, and dumping them into a deck you can play, at most, one day a week isn’t the best feeling in the world. As a result, and thanks to a decent selection of uncommon planeswalkers and legendary creatures, here are some entirely rare-free Brawl decks so you can get a foothold in the format.

Bear in mind that these decks are, necessarily, worse than the “average” Brawl deck; that’s the price of doing business with no rares! Be sure to check your collection for spare rares you have lying around to upgrade these decks. Each decklist below comes with an “upgrades” section, with a list of cards that it’s worth including (assuming you have them already). 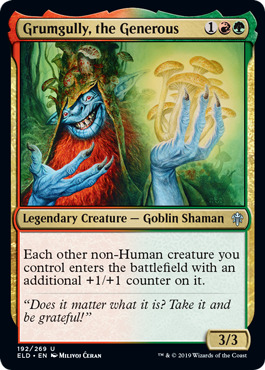 Grumgully reads like a rare at first sight–it offers a powerful ability at a very reasonable price, and even synergizes supremely well with existing Gruul mechanics like riot. Many of the best green and red commons and uncommons aren’t Humans, and so it’s very easy to build the core of this deck within our zero-rare constraints.

Obviously, we’ve gone deep on the +1/+1 counter theme here, as Grumgully’s passive ability is the perfect enabler for this approach. We can gain them from riot or adapt, grow them with proliferate, and even get some weird bonuses from them with cards like Jiang Yanggu and Rumbling Ruin. On top of this, there’s not a single Human in the deck!

The biggest issue is that Gruul decks generally want to go big, and while we have all the mana dorks to enable this, we don’t have much in the way of payoffs. Having big finishers like Skarrgan Hellkite or Biogenic Ooze will level this deck up significantly, so be sure to have a look through your collection to see if you’ve already picked up some big monsters to include. 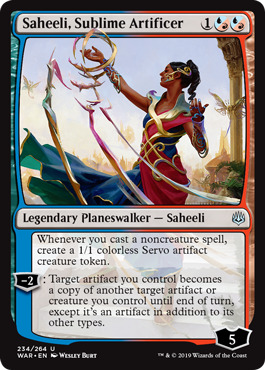 Saheeli, Sublime Artificer is the perfect commander for a Brawl deck. She gives you a very clear set of instructions: play noncreature spells and flood the board. Luckily, most of the cards we’d want to cast to support Saheeli (Opt, Shock, etc.) are commons and uncommons, so she’s perfect for a no-rares deck.

Saheeli is less of a planeswalker and more of an enchantment that can be attacked in this deck. You’ll very rarely activate her ability (usually only ever to beef up a Servo or turn one into a mana rock for the turn); she’s mainly there to just churn out 1/1s as you play your natural game. The overwhelming majority of the deck is noncreature spells, and the seven creatures all offer powerful synergies with the rest of the deck.

This is the best example of a deck that doesn’t make real compromises to meet our no-rare stipulation. Draw cards, kill things, win with Servo chip damage or a huge Crackling Drake–all these things can be done with commons and uncommons. This is the perfect deck for those looking to play straightforward, competitive Magic while still not burning wildcards on Brawl. 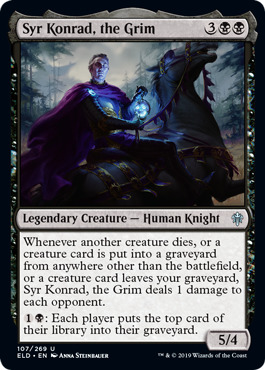 If you enjoy sacrificing creatures for fun and profit, Syr Konrad is your guy. He’s just as happy to see creatures head to the bin, and is a powerful payoff card for any “aristocrats”-style deck–any deck that seeks to gain value from the death of its own creatures. And at common and uncommon, there are plenty of creatures ready to be sacrificed at the altar of Syr Konrad!

Having so many one- and two-drops to feed to cards like Witch’s Oven, Plaguecrafter, or Bloodsoaked Altar is perfect, especially when many of them can be recurred (Sanitarium Skeleton) or provide value when killed (Orzhov Enforcer). All the while, Syr Konrad eats away at their life total, and even provides a mana sink in case you flood out.

Of course, the list can bear some improvement. Cards like Gutterbones or Dreadhorde Invasion provide more lambs for the slaughter, while powerful engine cards such as Priest of Forgotten Gods can also be found at higher rarities. Powering up this deck with some choice rares will quickly result in very noticeable improvement to this deck’s gameplay!

These lists are the perfect way to experiment with a format in its infancy, to test the waters and see if you want to invest further in it. I’ll be back next week for more Brawling on a Budget, this time with some lists that will cost you less than $100 in paper!