There is a weird feeling associated with achieving something you’ve been trying to reach for years. You’ve been pushing so hard and so long to this one goal, and when it finally happens, the emotion that you feel isn’t actually happiness—it’s relief. Achieving it became such a large part of your life that avoiding the disappointment of failure took precedent over the hope of success.

There’s also a weird feeling where sometimes you just know something is going to happen, even if that thing is unlikely. You feel an unjustified sense of confidence, and somehow you end up being right anyway.

Last weekend was the convergence of those two feelings. Last weekend I played in Grand Prix Barcelona. It was a big Grand Prix, the week before the Pro Tour, and near the location of the Pro Tour. That means that it was going to be absolutely loaded with some of the best Magic players in the world. Hundreds of professionals chose to Descend Upon the Barcelona. I was the most delirious of them, because going into the tournament I had this feeling that I was going to finally Top 8 and lock Gold Pro status.

For the past 3 years, I’ve been trying to make Gold. Each time, I’ve failed, just barely. For the past 3 months, any Grand Prix Top 8 locked me for Gold. Each Grand Prix, I’ve failed, just barely. I thought I had fairly good odds to make Gold this year before the end of the season in August, but every failed opportunity reduced my odds a little bit more. I could start to see the headline forming: “BBD fails to make Gold for the 3rd year running. Receives set of silver steak knives as consolation prize.”

I have Grand Prix Top 8s in Standard, Modern, and Legacy. I play a lot of Constructed Magic and am known as a Constructed player. My record in Limited at the last 3 Pro Tours is 1-2, 1-5, and 1-2. Not exactly crushing it. Over the last year, however, I’ve made it a priority to improve at Limited. I’ve gone 12-3, 12-3, and 11-4 at my last 3 Limited Grand Prix. For 4 months I made sure to draft at least two times a week. Even though sets were rotating and no longer useful for tournament play, I wanted to stay fresh and hone my 40-card skills. Those skills finally paid off.

I spent the week before this Grand Prix drafting with some of the best players in the world. One of the great things about being part of a Pro Tour team like Face to Face Games is playing with people who are extremely good at Magic. I did 18 drafts with these guys and I went 3-0 only once. To go 3-0, I had to beat two Hall-of-Famers and a Player of the Year. That’s harder than any draft I will play at a Grand Prix or Pro Tour by a long shot.

The Grand Prix started with a few members of our team fantasy drafting how players on our team would perform at the GP. I got picked 14th out of 14. It was fuel for the fire. The way I thought about it was that I was going to end up being that chubby, awkward kid who got picked last for a pick-up basketball game but 15 minutes later he’s dunking on all of the other players.

At 5-0 in the tournament, someone asked me what my record was. I said “7-0.” When they looked at me weird, I just said, “Yeah, I’m going to win the next two rounds.” I did. The next 4, actually. I usually don’t act like that, but I had this unshakable confidence and I wasn’t hiding it.

I ended up going 9-0 on Day 1 with a very nice WB Sealed Deck. Many of my creatures left something to be desired. I had a few rares, but I also had two 3/1s for 2 mana and multiple 3/1s for 3 mana. I was also playing a handful of Hill Giants and other vanilla-esque creatures. Trading down was the name of the game for me.

But my removal suite was premium. Sometimes it doesn’t matter if your creatures are only mediocre if you can kill everything. I could tell a lot of my opponents were tilted throughout the day whenever I would topdeck a nice piece of removal to kill their big threat. Little did they know, with about 8-10 removal spells in my deck, it was actually unlucky that I hadn’t yet drawn one. I killed anything and everything en route to a 9-0 record with the deck. 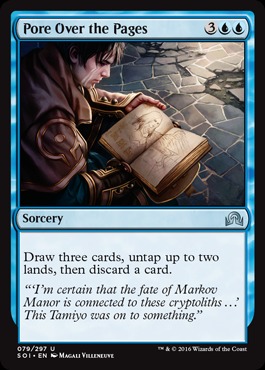 Nothing comes easy. My first draft was a trainwreck. I opened Duskwatch Recruiter, which I took. I then got passed a pack with Thing in the Ice and Pore Over the Pages as the 2 best cards. I ended up taking Pore Over the Pages because I felt like it had better synergy in a potential blue/green deck. Thing in the Ice isn’t usually that great in Limited especially in a green deck, a color that values creatures more than spells. The problem with this pick is that I sent a clear signal to the player to my left that blue was open. He took Thing in the Ice, ended up drafting blue/green to the left of me, and I got absolutely destroyed in pack 2. That one pick punted the draft for me.

I managed to squeeze out of this draft with a 1-2 record. I was still live for Top 8, but I would need to go 3-0 in my next draft, which featured Brad Nelson, Alexander Hayne, and Mike Sigrist.

To go 3-0 requires some bombs. I opened a pack with Topplegeist and a random green creature that was certainly better than Topplegeist. The problem was that the player to to my right opened Duskwatch Recruiter, so I figured that either he or the player between us would take that card and jump into green. Not wanting to fight over it, my choice was clear.

First-pick Topplegeist. Not exactly the bomb I was looking for. “**** it. We do it live!” Surprisingly, that Duskwatch Recruiter ended up making it to me 3rd pick, with a Fiery Temper still in the pack. I have no clue what the other players took, but I ended up falling into a very weird GW deck. I ended up with 3 Topplegeists at the end of pack 1. At the end of the draft, I had a GW delirium creature deck that only had 14 creatures, 6 of them 1-drops.

My deck also ended up being very good, and I didn’t lose a game.

The final round of the event was interesting. I sat down and shuffled up 39 cards. I went through my deck 3 times. 39 cards, and only 2 Topplegeists. I had shown a bunch of people my deck before the last round and I feared that one of my Topplegeists had accidentally toppled out of the deck. Here I am playing for Top 8 and Gold, and I’m thinking I’m going to get a game loss for losing one of my stupid cards. I had Nathan Holiday run to a vendor to buy one for me, and I called a judge who left to confer with the head judge about how to deal with the situation.

As it turns out, two of my sleeves had just stuck together. Someone who handled my deck had sweaty palms and suddenly, I did too. My knees, however, were not weak. My arms were not heavy. There was vomit on Topplegeist’s sweater. Mom’s delirium. The only Lose Yourself that I knew was what was going to happen later that day when I took a wrong turn trying to find the train station to get back to our house after the GP. I walked about 8 mile before I found it.

Topplegeist incident averted, I ended up playing what was a great match for Top 8 against a skilled opponent. In game 1, I was at 1 life and facing down a whole slew of creatures. I drew an instant to enable delirium for my 3 Topplegeists. I stabilized the board and slowly came back to win a game that seemed unwinnable. Lucky. 3-0, 6-0. Top 8. Gold. Game. Gas. Goulet. Geist.

I was on topple the world. 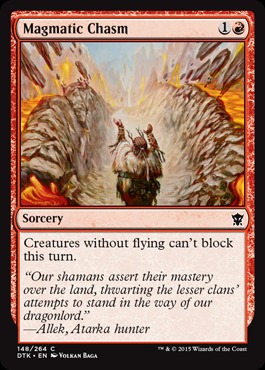 I was slayed in the first round of Top 8. In game 3 where I was at 16 life with 4 great creatures in play, Tenacity and Angelic Purge in hand and a Duskwatch Recruiter active, I managed to die to Magmatic Chasm plus 2 pump spells out of nowhere. Before the turn started I thought, “I think something cheesy like Magmatic Chasm is the only way I can lose this game.” My opponent tapped 2 lands, and played a spell. I couldn’t see any of the cards on his side of the board since the glare was so profound, so I had to pick it up to read it. GP Top 8, and I have to remember everything in play because I can barely see any of it. Legit. The card said “Magmatic Chasm.” Non-flying creatures can’t block.

None of my creatures could block and I died. If I was a creature, however, I could have blocked. I was flying on top of the world. Goal achieved. Gold achieved. Next step: Platinum. Game on.