Modern is full of cards that let you “cheat” on their mana cost. Whether it’s delve beaters like Gurmag Angler, Hollow One acting as a free 4/4, or Karn powered out by three Tron lands, the format is flush with strategies that involve lowering the cost of powerful spells.

For that reason, whenever a card emerges that has the option to be played for free, it’s important to pay attention. Arclight Phoenix is such a card, and despite a general level of hostility toward a 4-mana 3/2 (it dies to everything—Push, Bolt, a slight gust of wind), the Phoenix has been getting it done in one of Modern’s latest crazes: Runaway Red.

Runaway Steam-Kin is the other Guilds of Ravnica card that makes this deck possible, and it’s already receiving a fair bit of press. Generally speaking, I’m not a huge fan of playing with decks like this, but I have too much fun bringing back Arclight Phoenixes in Standard, and was intrigued to see what this card was capable of in my favorite format.

Then I remembered Thing in the Ice. When it was printed, I spent so much time trying to make it work in Modern using the old Blue Moon shell. As a famous Mexican philosopher once said, “porque no los dos?”

This deck is jam-packed with synergy—a lot of it very obvious, and some a little less so. Plan A is very straightforward—cast a multitude of instants and sorceries to bring back Phoenixes, cheapen Revelers, or flip Things.

The spell suite is purpose-built to support these creatures as strongly as possible. Outside of the interactive spells (Lightning Bolt, Fiery Temper, Abrade), it’s all about velocity—burning through the deck as quickly as possible, and filling up the graveyard. 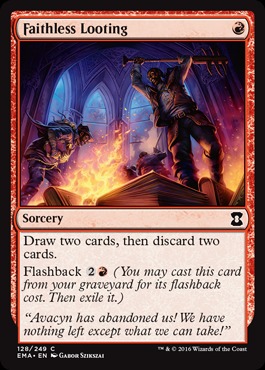 Faithless Looting, a pillar of the format, exemplifies exactly what we’re trying to do here, but everything from Thought Scour to Manamorphose synergize exceptionally well with the deck’s overall plan. Draw cards, discard Phoenixes and Fiery Tempers, reload with Revelers, and grind out the win.

One of this deck’s strengths is its consistency. Given the card draw and filtering, finding the cards you need in a given situation is generally pretty simple, and most games converge toward a similar game state when the list is able to churn through enough cards.

Bedlam Reveler and Thing in the Ice are known quantities, and there’s not much they’re doing in this deck that we haven’t seen before. Once the Thing wakes up, it doesn’t take too many hits to get the job done, especially as they don’t usually have blockers afterwards and because this deck has a bunch of reach. Even bouncing the Revelers isn’t the end of the world, as you can then draw a fresh three cards, and there are plenty of ways to discard a bounced Phoenix (or you can just, you know, cast it). As for the Revelers, they provide another way to bin those Phoenixes stranded in your hand, and enable a Mardu-like grindy late game.

The Phoenixes, in contrast, are new to Magic and offer a few sweet new angles in decks like this. Anyone who hasn’t yet played with (or against, for that matter) Arclight Phoenix is in for a bit of a surprise. Sure, it’s a recursive creature, but it has middling stats and dies to just about everything, right? Not quite. As many readers will already know, it is astounding how well this card enables the grind.

Much of the time, I look to use the Phoenix as a blocker, trading with everything from Bloodbraid Elf to Mantis Rider. It’s very easy to ensure it comes back every turn, and eventually they’ll run out of resources in trying to contest it while you continue to cantrip through your deck, filtering dud cards (and more Phoenixes) to the bin.

They also scale well in multiples. Once you have a few Phoenixes in the bin, you only have to invest three spells to bringing them all back. This is where the value train really gets rolling, and very few opponents will be able to keep pace as they trade off resources.

Finally—and incredibly importantly—remember that if you discard a Phoenix to your third spell, it will still come back at the beginning of combat! This means that if you’ve chained two cantrips, then cast Faithless Looting and discard a Phoenix, it’ll be ready to rumble as soon as you go to combat.

Obviously, the biggest problems when playing this list involve any opposing disruption that prevent your cards from going to the graveyard. Rest in Peace, Leyline of the Void, sure—but it’s more than that.

Both Path to Exile and Terminus are problematic for this deck. Arclight Phoenix is, generally, in a poor spot against white control decks as their answers are both numerous and exceptionally efficient. Given their pace of play, however, and the potency of your other threats, it’s possible to play around this removal by pushing with a single Reveler or Awoken Horror, ensuring that you don’t overcommit to the board.

Additionally, beating fast aggro decks is draw-dependent. This isn’t as bad a thing as you’d expect, thanks to the consistency of the deck. Casting Bolts and discarding Fiery Temper to keep your snoot above water in the early game is critical, but don’t forget that Thing in the Ice is a 0/4, and holds off early onslaughts effectively! 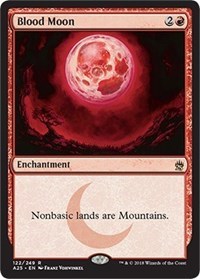 Blood Moon is one of my favorite cards in Modern, and I’ll play it whenever I can. 3 mana is a lot in a 19-land deck but again, the velocity of the deck can help you find the lands you need, and it’s worth it.

Blood Moon is a stone-cold killer against so much of the Modern format. It’s too good not to play.

Countermagic is important to contest everything from Tron to Control to Burn, and both Dragon’s Claw and Anger of the Gods do a lot of work against opposing aggression. Leyline of the Void might be a better option than Surgical Extraction, but I like sticking to the instants-and-sorceries game plan as much as possible.

It’s great to see how many people are out there cracking skulls with Arclight Phoenix. A mono-red version that’s very close to this Izzet list recently went 5-0 in a Modern League, with a much heavier burn component to offset the loss of card draw and support the inclusion of Monastery Swiftspear.

Obviously this list is a little more one-dimensional, being focused on all-out aggression. Still, little-seen niche cards like Needle Drop and Flame Jab help trigger the Phoenix reliably, and the option to burn opponents out from range is always excellent. Any way you slice it, we haven’t seen the last of Arclight Phoenix in Modern!