This was supposed to be my Core Set 2021 review. While nothing rises to the level of Mystic Sanctuary there are still a number of potentially playable cards coming soon and I promise we will get to them soon. But first we need to talk about JumpStart. As of this writing there are a few cards that have caught my eye for their potential impact on Pauper. First up is the cycle of Thriving Lands. 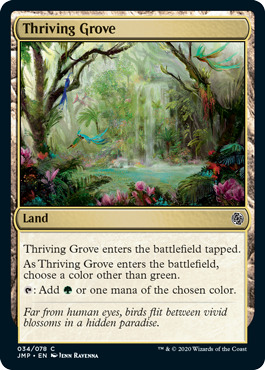 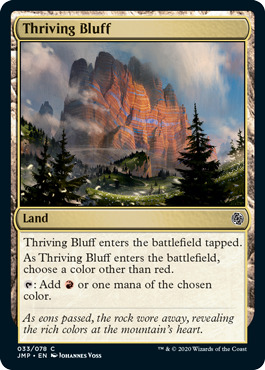 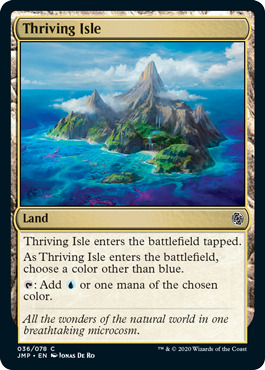 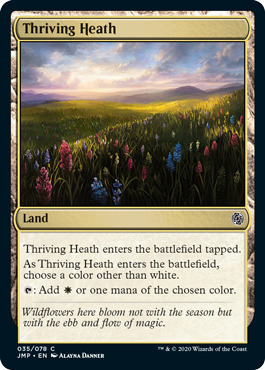 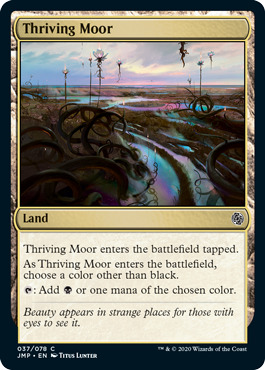 These all enter the battlefield tapped and tap for two colors of mana, only one of which is set. When they enter the battlefield you get to pick the second color. So in the case of Thriving Moor, you can use this to tap for a black and one other color of mana. Memory issues aside, these are a sweet addition to Pauper. The mana available in Pauper has two glaring holes. The first are viable two color aggressive decks – there simply are not any good lands that can produce two colors of mana while also entering the battlefield untapped. The second area for improvement are three color midrange decks. While these have largely been held together with Prophetic Prism (and formerly Arcum’s Astrolabe), the Thriving Lands provide them with the opportunity to get the correct mana more often. I fully expect to see more decks splashing for key cards in a third color off of these lands.

They also open up the potential for high impact sideboard cards. If you have a terrible Affinity matchup and aren’t running red, you can run a Thriving land as one of your duals. Now you have access to Gorilla Shaman in the sideboard. These lands will change the way midrange decks are constructed in Pauper and open up a ton of possibilities.

The next card that got spoiled isn’t new and in fact is going to look awfully familiar to Standard players.

While Witch’s Oven is not Pauper legal, Cauldron Familiar represents something that is hard to find in Pauper: a creature that brings itself back from the graveyard. Pauper lacks a consistent one-card Food engine but now Curious Pair and Gingerbread Cabin look far more palatable. The thing that has me most excited is paring the cat with Bartered Cow and Tortured Existence. Tortured Existence is an engine that is constantly in need of a little extra fuel. Now the deck can run Bartered Cow or Curious Pair and have a way to generate Food. Add Cauldron Familiar and you have another angle for attack. While this may not be strong enough to punch through the wall that is Stonehorn Dignitary it does provide yet another angle of attack for Tortured Existence. 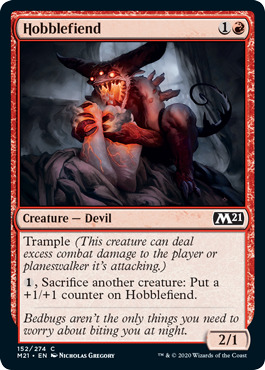 Hobblefiend is not the best card in the latest Core Set but it is one that interests me quite a bit. Carrion Feeder is one of the best sacrifice outlets in Pauper since the counters stick around and it costs nothing to feed the zombie. Hobblefiend is halfway there since the counters stick around, but each sacrifice costs a single generic mana. The upside is this devil comes with trample. One of the issues with Carrion Feeder is that it can often be brickwalled but Hobblefiend, if sufficiently large, cannot be easily chump blocked. While it presents an interesting option for Aristocrats strategies, I think pairing black with red is not as good as going Golgari. 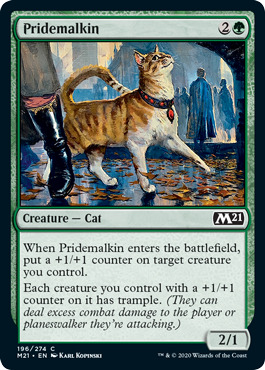 That’s where Pridemalkin comes into play. Green can help power out threats in Aristocrats with cards like Loam Dryad and Saruli Caretaker. While green doesn’t have Hobblefiend it does have Bloodbriar. Golgari Aristocrats decks can therefore run three creatures that get naturally buffed with counters in Bloodbriar, Carrion Feeder, and Mortician Beetle. In this world Pridemalkin is basically a three mana Overrun. That’s pretty good. And there are plenty of these counters running around Pauper – it wouldn’t surprise me to see a copy pop up in some experimental Stompy lists since Hunger of the Howlpack sees heavy play in the deck. 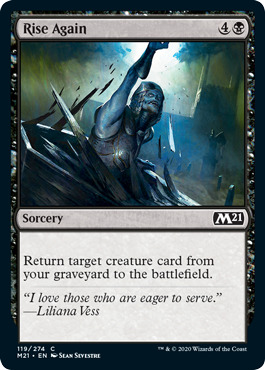 The next card I am excited about is Rise Again. I have been hankering for a backup to Exhume for quite some time and Rise Again, while expensive, is just that. While Breath of Life and False Defeat are both legal in Pauper, they are in a color that does not excel at getting things into the graveyard. Now that black has access to Rise Again it can be paired with red for Cathartic Reunion and Faithless Looting or blue for Careful Study and Looters to set up reanimation strategies. While far from top tier, this is exactly the sort of card Pauper needed to bolster a fringe archetype. 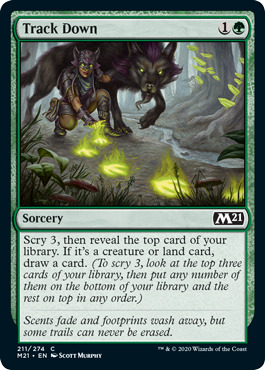 Track Down is a heck of a card. If you build your deck correctly you are going to get a draw off of this almost all of the time. The fact that you get to scry 3 is pretty massive. Not only do you get to potentially set up your next two draws but if everything is awful you get to put them all on the bottom, allowing you to see the same number of cards as Ponder. There are already two creature heavy combo decks in Pauper – Elves and Walls – that often need to find a key creature. Track Down provides redundancy to Lead the Stampede and Winding Way while also potentially getting you a land. All in all a fantastic card. 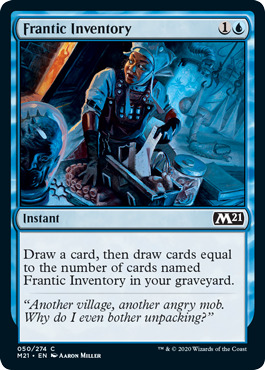 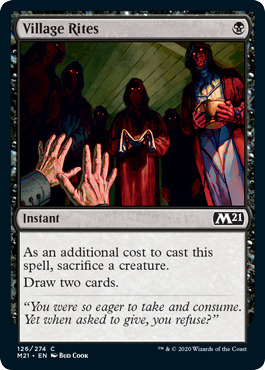 Finally there’s Village Rites. One mana for two cards is an excellent rate and there are enough ways to mitigate the sacrifice that the cost barely registers. In a deck with the newly downshifted Cauldron Familiar this puts the cat in the bin only to be brought back by some food. And this says nothing of additional synergies with cards like Nest Invader or Tragic Slip.

So that’s where I’m at. These upcoming releases look to shake up Pauper. While I don’t think anything is going to upset the current metagame there are enough new tools available to add some wrinkles to the format. Once the Thriving lands become available, I am incredibly excited to see what sort of nonsense we can get ourselves into.