Some fun facts from the Mythic Championship Qualifier held on MTG Arena this past weekend.

Yeah…. So today we’ll talk about the new most popular best deck in the format, Sultai Food.

I picked these two lists as they’re generally representative of the whole and both players earned their 5 wins on Day 2 to qualify for the Mythic Championship. The key to Sultai Food is the same thing that made Bant a popular choice at the most recent Mythic Championship–you take a niche card (Noxious Grasp) and jam a playset against the best deck (Simic Food). Only in this case it’d be closer to Golos somehow fitting in quad Disdainful Stroke for the mirrors. And the card also hit every relevant card in the deck. And it gained you one life.

Seriously, Noxious Grasp right now may as well be a two-mana Hero’s Downfall that gains you one life: that’s how omnipresent green is as a whole and how hard-up every other removal spell is to try and compete with that flexibility. Vraska is nice and the same goes for having better anti-aggro options in Legion’s End and Massacre Girl, but the star of the show for most is going to be Grasp. Although the deck having access to Oko, Wicked Wolf and Massacre Girl sure does make going wide with GW Adventures a heck of a lot harder…

Here are the biggest factors I believe will give you a small edge against many players while jamming the deck, especially in Sultai vs. Simic Food mirrors.

I would not keep any hand without a play/Grasp in the first 2 turns, even on the play. It doesn’t matter how tempting it is, snowballing is the name of the game in this matchup and you only get to play the more intricate game states if you survive the initial blizzard. Hands without a good follow-up to Grasp will also get pitched because just knocking off their first big threat isn’t enough, it needs to be the first two or you need a solid follow-up like Oko or Wicked Wolf to knock them off Nissa mana. On the draw, it’s also quite reasonable to throw back hands with just a Paradise Druid, though I’ll keep all ramp and no action as those hands have 1-3 draws to gain traction and turn-three Nissa is often worth multiple cards.

Overall, the key factor for this deck is the sheer consistency of Once Upon a Time and the London Mulligan. Llanowar Elves/Birds of Paradise are powerful cards and are rarely bad in a given Standard format regardless of context. For this format, you get to see a world where your turn-one mana dork is seen in around 70% of your games (if willing to mulligan to 5 for a turn-two Oko hand). Turns out Standard mana acceleration and the format as a whole was never built with that sort of consistency in mind, and it’s why so many of the games feel similar and why the base Simic deck is so strong. 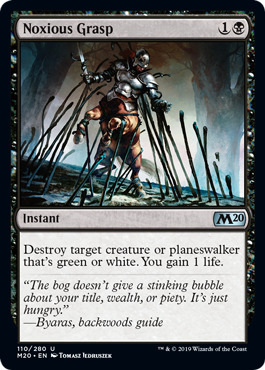 One of the biggest reasons Sultai Food was so popular (and successful) at the Arena Qualifier was because of access to maindeck Noxious Grasp giving it an unparalleled angle of interaction in the mirror–The ability to directly destroy opposing planeswalkers without the combat step. It helps when the card you’re utilizing for this role is a better Hero’s Downfall. So if you were wondering why it’s gotten to the point of maindecking a full playset of the card, just imagine having a better Downfall against 80%+ of the metagame.

So now you have a card that can counter an early Oko or Nissa with minimal investment and is actually playable on the draw. The only reason being on the draw isn’t a bad dice roll is because you can directly counter your opponents best starts. Snowballing with a good start yourself is still the best way to win the mirror, but for those games where you’re a step behind you no longer have to skip your turn or play into an obvious Wicked Wolf or be short that one attacker worth of damage to kill Nissa, leading to a Hydroid Krasis for 8 the next turn.

For example if you’re on the draw and they jam turn-one Goose, turn-two Oko. You play your land and Grasp the Oko. What’s their next play going to be? Wicked Wolf is a trash play for them there, Questing Beast is okay but they won’t get any value and it plays into your turn-three Oko for free. Nissa won’t hit until turn 4 at earliest. This also means if I use Grasp on their first real play when we have dueling Geese I get to use Wolf, Vraska or Hydra eat their Goose and stifle their growth significantly on turn three. If you have multiples or don’t need to deal with it, you can also just save Grasp to protect your planeswalker or kill the first Nissa they drop.

This is also known as not adding too much air into your deck and leaning too heavily on situational draws. Don’t keep a hand of do-nothings and Disdainful Stroke or try to mulligan into a hand of ramp and Aether Gust. You still need to play Magic and a seven you keep that looks like a normal hand is still often as good or better than a normal six with a sideboard card, or a seven with say Gust/Grasp and no ramp or action until four mana.

This was one of the harder lessons to learn and one I still think I can improve on. Don’t go overboard with marginal/situational cards in your sideboarding and with your keeps. Noxious Grasp is the best answer, hands-down. That’s why you can jam a playset and not care and why you don’t have to worry about trying to save Disdainful Stroke for Nissa or anything weird.

Most of the postboard games are still snowbally, but when both teams interact they can turn into slogs until someone gains an advantage (usually with an unchecked planeswalker). I turned away from Hydroid Krasis in the mirror because by the time it truly made a difference the games were more or less decided. Sure, it’s an easy closer if you land Nissa first and they can’t answer it, but otherwise spending six mana on it isn’t doing anything that exciting, nor does it claw you back into a planeswalker/board war you’re losing.

Krasis is still fine and I like it in normal matches–plus it’s game over if you ever untap with Nissa and Krasis in hand–so I understand people who play a lot, even though I feel it sometimes steals Voracious Hydra’s spot. I just think the mirror is prominent and snowbally enough that it’s harder to get value out of “fair” Krasis.

For normal Simic mirrors, I think Kraul Harpooner is still a strong card on the play because it can nicely stop your opponents best early draw and still has some value later. Aether Gust is closest to maindeckable and likely does enough utility-wise to justify its spot.

With Sultai Food picking up as the new “best” version of the Food deck, Veil of Summer maindeck may not be out of the question either. Stopping Noxious Grasp or a Vraska -3 with a Veil can be backbreaking and only costing a single mana means you rarely have to sacrifice a full turn to hold up your interaction (unlike Disdainful Stroke or Noxious Grasp). It’s much easier to make a different line of play and only need to hit six mana to play Nissa with Veil backup than vice-versa. There’s actually a lot of interplay here depending on what sideboard cards you believe your opponent has at a given moment, and post-board games can play out in relative slow motion to their pre-board counterparts if both players act conservatively.

As for more specific sideboard cuts, my general rules of thumb are:

Can shave 1-2 if you want to lower the curve: Hydroid Krasis, Voracious Hydra

Often shaved or outright dropped depending on match: Paradise Druid, Once Upon a Time

Once Upon a Time is a card many players are familiar with shaving down on, but post-board the games often drag out longer regardless of matchup and snowball draws are less of a concern. So not only are you often adding more spells to the deck, but you often don’t care as much about slamming that turn-two Oko or turn three Nissa since often your opponents will have cheap answers that blunt their impact. Paradise Druid is similar; you have less need of ramp as you’ll see more draws and playing spells on natural curve is more effective.

If game one feels too much like a Modern deck aggressively jamming out its optimal start, games two and three often feel closer to normal games of Standard Magic from 4-5 years ago against prepared opponents.

Should Oko Be Banned?

While I don’t want to bore people with a full discussion of what to do now from a banlist perspective, I will say that the decision to pass the buck on the Field announcement has only put Wizards in a tougher spot. They either double down and ride the format out and hope the next set accomplishes something, run the “Simic is too good but we can’t ban Oko” play and ban some combination of Once Upon a Time, Gilded Goose and Nissa, Who Shakes the World to slow down the deck, or they pull the trigger on Oko before even more time passes. Personally, I’m still on the “Ban Oko” train as it solves a lot of problems and the card is already seeing high-level play in every other Constructed format, so it’s not like it’s banned out of Magic altogether.

While Oko remaining will warp the format, taking out Gilded Goose and Once Upon a Time KO’s the most brutal draws and reduces the consistency of Simic Food to a normal deck. It also reduces the food generators for Wicked Wolf to just Oko, which indirectly nerfs the card into a much healthier spot. This also prevents takes out the power spike we’ve seen from mana dorks with the London Mulligan in full effect and it can be much more of a considered choice in the future. Meanwhile, Nissa is just a disgustingly strong card that makes Krasis into a powerhouse, only overshadowed by similarly strong planeswalkers that cost only three.

Ultimately, I’m hard-pressed to currently recommend anything besides the Simic Food base or one of its many variants for a tournament. It isn’t just the strength of turn-two Oko–it’s an amalgamation of the many strong cards in the deck, metagame considerations constraining just how good Nissa is and the huge jump in consistency of strong openers thanks to Once Upon a Time and the London Mulligan. If you do decide to work against the grain, make sure you absolutely have a deck that beats Simic Food or you’re wasting your time and money. Maybe one of the other qualifier decks that didn’t feature Oko is solid…Azorius Control is always fun, right?