I couldn’t be more stoked for the Amonkhet Team Sealed Grand Prix in Cleveland this weekend! Team events have always been my favorite. There is something uniquely awesome about teaming up with a couple of buddies and battling against other teams.

I’ve been working a lot to improve my preparation for specific events over the past few months. I try to immerse myself in a format and learn as much as I can before attending the event. Team Limited is no different than any other format in that it has its own quirks and intricacies. I’ve obviously been pretty focused on Limited, in general, having played multiple Limited GPs, an RPTQ, and the PT, but in many ways Team Sealed is a different animal altogether.

Rule #1: Know What You Are Looking At

Rule #1 is actually more of a suggestion but one I think you should take to heart!

The hardest part about building a Team Sealed Pool (in my opinion) is figuring out what the most ideal color pairings will be. 12 packs and 168 cards is a ton of information to sift through quickly.

I came up with a strategy that I think eliminates a ton of building time and helps clarify the best combinations of colors. This is a strategy my teammates and I have been using to great effect in our practice builds.

The key is that we can quickly get a sense of the creature-based mana curve of each color and figure out which colors are likely to be ideal to pair with one another.

Your curve is extremely important, and I’ll show you how to compensate for any holes yours might have.

You should also know which colors have Trials and/or Cartouches in them to pair them up when possible!

Rule #2: Team Sealed is Very Fast and Your Decks Should Be Better Than Draft Decks

It is common knowledge that Sealed tends to be slower than Draft and that Draft decks tend to be better than Sealed decks. Do not apply this reasoning to Team Sealed!

12 packs is a ton of packs from which to build three 40-card decks, and the overall power level of your decks should be at or better than an average Draft deck. Don’t assume your opponents’ decks will durdle because you are playing Sealed. Correctly built Sealed pools facilitate multiple fast, aggressive, and powerful decks!

Do not make the mistake of assuming people’s decks will be grindy and slow, because they won’t be. Focus on maintaining the curve and maximizing your synergies to gain power.

Since the format is fast and aggressive, it is important for your decks to be able to interact starting on the second turn. The plan of playing a 3-drop on the draw is a recipe for losing the game before it even starts.

I strongly recommend at least 5-6 cards with CMC of 2 or less in each deck and ideally I want at least 3-4 of those cards to be creatures that I can play to impact the board. 1- and 2-drop removal spells are great because they give you a way to interact early, but you also want to be able to deploy threats on curve as well!

I know I’m hammering home the point, but curve is really important.

Even if a particular color combination looks spicy and has synergy, if it is badly lacking in 1- and 2-drop options, I would strongly advise considering other options.

You will always have more than enough playables for each of your decks. The quality of the commons and uncommons is high in Amonkhet, and you’ll have options.

One of the biggest mistakes is to overvalue removal. Don’t get me wrong—removal is great and you need it! But too much of a good thing can be dangerous.

There are a lot of great synergy cards in Amonkhet where creatures matter. In particular, the Cartouche cycle needs creatures in play to work. There are also a number of amazing combat tricks.

But it’s easy for inexperienced players to fall into the trap of not playing enough creatures. They overvalue removal via a thought process like, “Electrify is a better card than Minotaur Sureshot.” 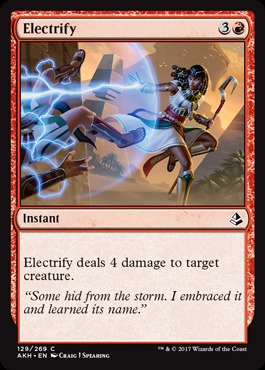 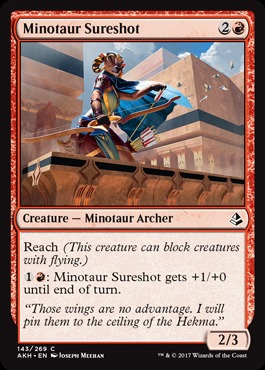 Be careful not to use Draft pick orders to assess what your Team Limited Sealed deck needs. While it might be correct to take an Electrify over a Sureshot, you are playing a totally different format and the rules are a little bit different.

Rule #5: Spread the Removal Around

While I caution people not to play too much removal in decks without enough threats, I’d also like to caution against splitting your pool in such a way that leaves one deck without good removal options.

Balance is the key to Team Sealed, and the more each deck can do well the better. In particular, you don’t want to build a deck that has any glaring weaknesses…

Weaknesses You Should Avoid

If you simply build decks that don’t have these obvious problems, you’ll be ahead of the curve. The better you balance these factors, the better your decks will be.

No removal is not a great place to be for obvious reasons. It’s worth noting that combat tricks in aggressive decks can count as pseudo-removal since you’ll put opponents into must-block situations and capitalize.

Rule #6: Don’t Pick Your Decks Based on Bombs

“We have a Glorybringer, an Archdemon, and a Glyph Keeper, and so we should put one of each in 3 different decks for balance.”

This is not the balance I’m talking about. I would much rather build my decks based on where I can best spread my curve around than by putting the best cards in different decks.

It may be correct according to curve and synergies that U/B lines up well and you need the Demon and the Sphinx in the same deck. It may feel like overkill, but it might still facilitate your best 3 decks!

I’ve mentioned that your deck should be at least as good as a Draft deck. One of the ways to ensure that your decks are good is to know the best archetypes right from the start!

Archetypes are derived from synergies and interactions between the common cards. Decks you should be aware of and look to make when possible:

Different color pairings have better opportunities to exploit and emphasize certain keyword mechanics. These are some of the major ones to keep in mind while you are building. There are also other minor Limited archetypes that can come up, such as Slither Blade.

If you have a general idea of the decks that tend to be good in Draft, those same traits are applied in Team Sealed.

Rule #8: Have Fun and Enjoy Battling with Your Teammates

Team events are not that common, so take advantage of playing in them whenever you can. It’s like nothing else in Magic!

Be a good teammate. Listen to your friends and let everybody voice their ideas and opinions. Don’t argue too much during the build. Go with the flow.

Rule #8 is the most important one: Have fun with it and make some memories with your friends!