The ban of Veil of Summer in Standard also means that Thought Erasure is now officially unbanned in Standard! Despite some early hate in 2019 toward Esper, it now has a special part of my heart, so I’ve been working to make Esper Control viable in Standard since Monday.

I never liked Esper Dance. Too many bricks and not enough tools to handle early aggression other than Kaya’s Wrath. Esper Control, on the other hand, has plenty of cards to help you live through the early game and cruise into the late game where you’ll take over.

The name “Esper One” comes from the time of War of the Spark Standard, with Esper Control and Esper Hero. I was a supporter of Esper Control, and played it to decent success even in M20 Standard against the Kethis menace. With the departure of Teferi, Hero of Dominaria and checklands, we find ourselves with a weaker deck for sure, but one that can still compete in the metagame.

If you’re a Thought Erasure fan, this is the deck for you. I managed to have a positive matchup against Jeskai Fires and B/G Adventures, and a slightly unfavored matchup versus Cat Food, although with the recent addition of Fae of Wishes for Ethereal Absolution I don’t believe we’re a complete underdog there. 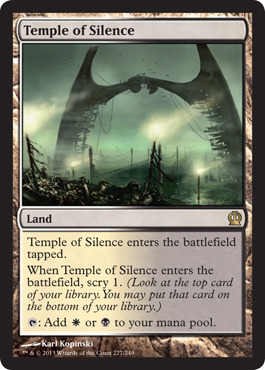 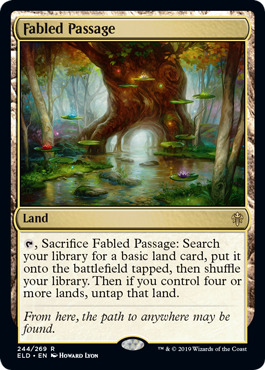 The question I’m asked most on stream is why I’m not playing Narset, Parter of Veil. Narset was a pillar of old Esper One, both as a way to get card advantage and to keep Teferi, Hero of Dominaria, Hydroid Krasis, and the Izzet Phoenix deck in check. Now those three decks are fading away, but most importantly the new mana base is much worse than the previous one.

While we wait for the new set to bring Temple of Enlightenment and Temple of Deceit, we have to give up a color in order to have a solid mana base. This one grants us 19 white sources, 18 black sources, and 13 blue sources, which are enough to cast the spells that we play, but not enough to play a double-blue spell.

Counting Fabled Passage  and Island as full blue sources is tricky, because if you want to use those to cast Thought Erasure or Tyrant’s Scorn on turn 2, it means that you can’t cast Kaya’s Wrath or Basilica Bell-Haunt on turn 4. That’s why I decided to shave on Kaya’s Wrath to make room for Ritual of Soot and Cry of the Carnarium, which are weaker but easier to cast.

The mana base is the biggest weakness of the deck, and I can’t wait to pick up this deck again with the new set of dual lands, I’m hoping for a future where Wizards R&D understands how important it is to have good dual lands and proper mana bases for a healthy standard that doesn’t force you to play green to fix your mana. 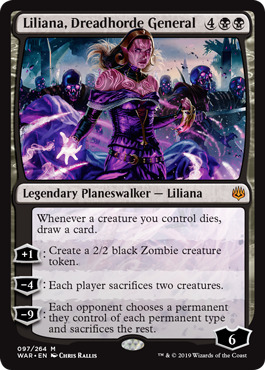 Back in the day, Teferi, Hero of Dominaria did all the heavy lifting for you. Now you have to be more careful, since if your opponent has a bunch of Murderous Riders for your Liliana, Dreadhorde General you might find yourself without a way to close the game, and your opponent will topdeck their way back into the game. That’s why my teammate Anthony Lee had the clever idea to add Fae of Wishes.

Fae of Wishes serves as more than a win condition. It tutors up Ethereal Absolution, which is back-breaking versus Cat Food—a very tough matchup.

You can also Granted for Castle Ardenvale on turn 5 because hitting land drops is very important in this deck, and White Castle is exceptional. The mana base is skewed toward black and white, that’s why I opted to have the white Castle over Castle Vantress.

As opposed to many of the decks with Fae of Wishes in their main deck, Esper One still offers a wide range of cards to sideboard in every matchup, since most of them are cheap interaction that you’ll be happy to swap in for less situational cards.
I usually never board in Castle Ardenvale or Ugin, the Ineffable, as those are the best Wish targets, and it’s very nice to have cards like Disfigure and Devout Decree which can be helpful in some scenarios, as well as being very powerful cards to draw in game 2 when you board them in.

I don’t think this deck is the best deck in Standard, but I do believe it’s a playable deck, and something fun if you enjoy playing some Thought Erasure in your opponents draw step!